At Cuzco Amazonico, near Maldonado, Peru, Stefan Cover and John Tobin found meinerti in mature terra firme forest and forest transitional between terra firme and seasonally flooded forest. The species appears to be adapted to unstable nest sites on the ground. Two of the colonies were between dead leaves in the leaf litter, and one was in a rotten stick on the surface of the litter. Colonies were small, consisting of 100 workers or less, and a single queen. Cover (personal communication) notes that both majors and minors have long legs and antennae, move very rapidly, and are not aggressive when the nests are disturbed. In this respect they resemble Pheidole aripoensis, Pheidole cataractae and Pheidole demeter. Possibly these are traits that represent a guild of opportunistic, frequently emigrating ground nesters. (Wilson 2003)

Known from single records each from Venezuela, Guyana, and Amazonian Brazil, Peru, and Ecuador. (Wilson 2003)

Minor: pilosity of dorsa of mesosoma and waist sparse, consisting of a small number of short, erect pairs of setae, some of which are clavate; some hairs on rear third of head also clavate; occiput narrow, with thin nuchal collar. 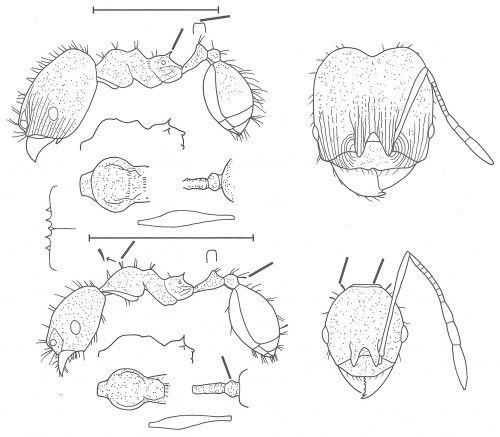 Named after the collector F. Meinert.