Stefan Cover (unpublished) encountered micula in the mountains of southern Arizona consistently between 1480 and 1690 m, in grassy meadows, sometimes surrounded by juniper-oak woodland. The small colonies were nesting variously under small rocks and in crater nest built in open soil. In western Texas, Moody and Francke (1982) found micula in crater nests built in open soil. A single colony was discovered by G. C. and J. N. Wheeler (1973) in the cholla-palo verde scrub at Deep Canyon, California, nesting under a stone; seeds of Artiplex, Cryptantha, Oenothera, and Sporobolus were present in the nest. (Wilson 2003)

From Wilson (2003): DIAGNOSIS A member of the “pilifera complex” of the larger pilifera group; for a characterization of the complex, see under Pheidole pilifera. P. micula is distinguished within the complex by the following combination of traits.

Major: entire occiput covered by transverse carinulae that sometimes circle downward at the sides of the head and continue to the anterior border of the head; pronotum very low relative to the mesonotal convexity; propodeal spine equilaterally triangular; petiolar node from the side tapering to a blunt point; postpetiole from above diamond-shaped.

Minor: eye very large and set well forward on the head; propodeal spines reduced to denticles. Stefan Cover, who has studied this species more intensively, offers the following cautionary note (in litt.): “The cephalic sculpture in P. micula majors is variable and may cause confusion. The type majors represent one extreme [as depicted here—EOW] in which the fine transverse rugae on the occiput wrap around the corners of the head and extend down the sides to the mandibular insertions. In most other collections these lateral rugae are partly absent, leaving the sides of the head posterior to the eye more or less smooth and shining, except for scattered punctures [foveolae].”

COLOR Major: clear yellow-orange, the head a shade darker than the rest of the body. Minor: concolorous clear yellow. 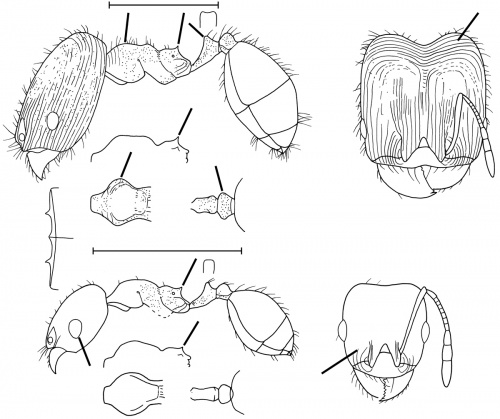 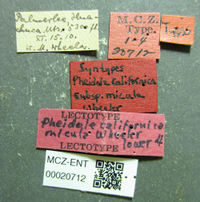