Stefan Cover collected the type colony from a nest in a rotting stick on the floor of montane rainforest. (Wilson 2003)

Known from the type locality (Trinidad) as well as series from Panama, Colombia, Brazil (Pará), Peru, and Ecuador. (Wilson 2003)

A small yellow member of the fallax group characterized by the following combination of traits.

Major: head heart-shaped; pilosity over all of body, and especially clypeus, mesosoma, waist, and gaster, very long, dense, and erect to suberect; a large-celled patch of rugoreticulum present to the side and behind each antennal fossa; carinulae on head and body almost entirely limited to the anterior half of the head, with most of the frontal lobes bare.

Minor: occiput broad, lacking nuchal collar; pilosity very long and mostly erect to suberect; only carinulae present are the circular ones around the antennal fossae, and foveolation is limited to the meso- and metathorax and propodeum, with the rest of the body smooth and shiny. 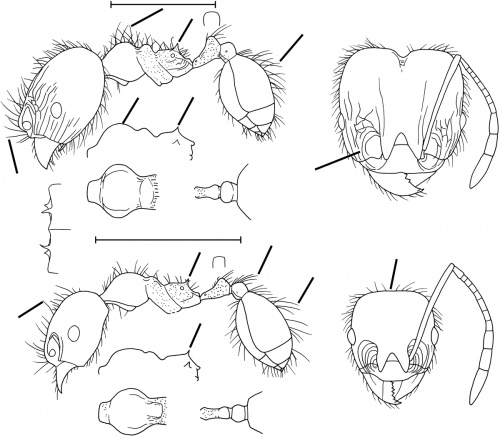 Gr Midas, mythical king whose touch turned everything to gold; with reference to the color of the workers.