This species inhabits well-developed hill forests. I found its nests in the soil, and many colonies were collected from rotting logs by TK. (Eguchi 2001)

Eguchi (2001) - This species is closely related to Pheidole comata and Pheidole longipes, and all these are peculiar among Indo-Chinese and Indo-Malayan congeners in the characteristics noted under P. comata. Diagnostic characteristics of this species which separate it from P. longipes are: propodeal spine horn-like, more than 3.5 times as long as diameter of propodeal spiracle in the major and more than 4 times in the minor; in profile dorsum of promesonotal dome in front of the prominence on its posterior declivity bearing 10-20 standing hairs in the major. Body yellowish-brown to brown in the minor. This species is distinguished from P. comata by the characters noted under P. comata. 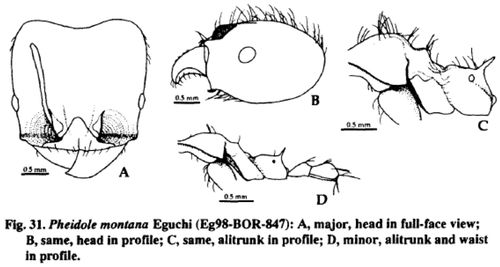 Eguchi (2001) - Major (n=8): TL 5.8-6.3 mm, HL 2.37-2.70 mm, HW 2.32-2.53 mm, SL 1.60-1.72 mm, FL 2.63-2.87 mm, CI 93-100, SI 64-71, FI 108-117. Head broadest at 3/5-7/10 distance of head (as measured from the mid-point of a transverse line spanning the anteriormost and posteriormost projecting points, respectively; posterior margin of head in full-face view with median emargination from which an inconspicuous longitudinal impression extends to midlength of head (Fig. 31A); head in profile not impressed on vertex (Fig. 31B) Hypostoma without median processes. Clypeus with a median longitudinal carina, with anterior margin weakly emarginate medially. Eye situated around 1/3 distance of head; distance between mandibular insertion and anterior margin of eye 1.7-1.8 times as long as maximal diameter of eye. Frontal carina and antennal scrobe present only around antennal insertion. Antenna without conspicuous club; scape extending backward to 4/5 distance of head. Masticatory margin of mandible with apical and pre apical teeth, and a denticle in front of basal angle. Promesonotal dome with a distinct prominence on its posterior declivity (Fig. 31 C); the prominence in anterior view not or very weakly concave medially. Mesopleuron with an indistinct transverse impression. Propodeal spine corniform, 3.5-4 times as long as diameter of propodeal spiracle. Petiole in profile cuneiform, almost as long as postpetiole, with ill-defined node of which apex is in posterior view distinctly concave. Postpetiole in dorsal view subpentagonal, 2.2-2.5 times as broad as petiole.

Frons and gena longitudinally rugose; dorsum of occipital lobe with fine longitudinal rugulae curving outward, and with interspaces weakly punctured and dull; lateral face of occipital lobe finely and weakly rugose, sometimes with punctured interspaces; median portion of dorsolateral face of head rugoso-reticulate with enclosures punctured and dull; promesonotal dome smooth and shining; remainder of alitrunk largely punctured very weakly and shining; lateral faces of petiole and postpetiole very weakly punctured and shining; dorsa of petiole and postpetiole punctured very weakly, or smooth and shining; gaster smooth and shining. Dorsal face of head (including occipital lobe) and lateral face of occipital lobe bearing standing hairs (Fig. 31A); outer face of mandible sparsely covered with appressed to decumbent hairs, which are 0.05-0.08 mm in length and shorter than distance between piligerous punctures; submarginal zone of masticatory margin of mandible with a row of longer decumbent hairs; in profile dorsum of promesonotal dome in front of the prominence on its posterior declivity bearing 10-20 standing hairs (Fig. 31C). Body yellowish-brown, brown, or reddish-brown; legs lighter than alitrunk.