Nothing is known about the biology of napoensis.

Known only from the major.

DIAGNOSIS A striking, large member of the tristis complex, similar to Pheidole bellatrix of Colombia and more distantly so to Pheidole pepo, Pheidole rotundiceps, Pheidole sphaerica and Pheidole subsphaerica, variously from Colombia and Ecuador, and distinguished as follows.

Major: promesonotum in side view forms a very large hump towering over the propodeum; antennal scrobes present; humeri very broad and rugoreticulate; postpetiolar node conulate; a patch of rugoreticulum present behind and below the eye. Minor: unknown. 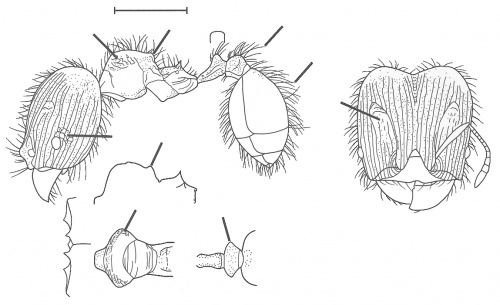 Named after the Ecuadoran province of origin.