The Cundinamarca and Meta series were collected from steep forested slopes. (Wilson 2003)

Known from the type locality; and from near Villavicencio, Meta; and from Mocoa, Putumayo, 610 m, col. Charles Kugler. The record of P. oliveirai recorded by Fernandes et al. (1994) from San Antonio de Posse, São Paulo, is in error, due to my own misidentification. The species they studied is actually Pheidole oxyops, a member of the diligens group (q.v.). (Wilson 2003)

A member of the fallax group, similar to Pheidole galba and Pheidole huacana, differing as follows.

Major: brown; rugoreticulum on head limited to space between eye and antennal fossa on each side, preceded anteriorly by longitudinal carinulae and posteriorly by rugulae that travel from the frontal lobes to the side of the head; rear half of ventral side of head smooth; nadir of occipital concavity moderate; propodeal spines reduced to denticles; vertex smooth.

COLOR Major: body light brown except for anterior fourth of head capsule, which is brownish yellow, and gaster, which is dark brown. 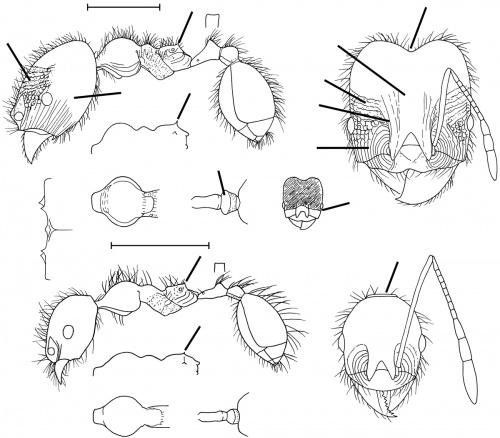