According to Longino (1997), the species nests in pieces of dead wood in the ground litter of lowland wet forest, including beneath the bark of rotten logs. It forages on the ground and in low vegetation, and workers have been observed at extrafloral nectaries of Passiflora pittieri.

The Atlantic and Pacific lowlands of Costa Rica (Longino 1997).

DIAGNOSIS A small, yellow species in the flavens group similar to Pheidole longinoi and Pheidole prolixa, distinguished in the major by a brown spot on the vertex of the yellow head; by the very low mesonotal convexity; stout, posteriorly directed propodeal spines; and absence of carinulae over most of the frontal lobes and entire middle half of the cephalic dorsum; and in the minor by the absence of a central convexity in the mesonotum, which drops steeply at the rear to the metanotal groove.

COLOR Major: gaster and appendages clear light yellow, rest of body medium yellow, with a contrasting fuzzily defined brown spot 0.1 mm across in the middle of the head one-third forward from the occipital border. 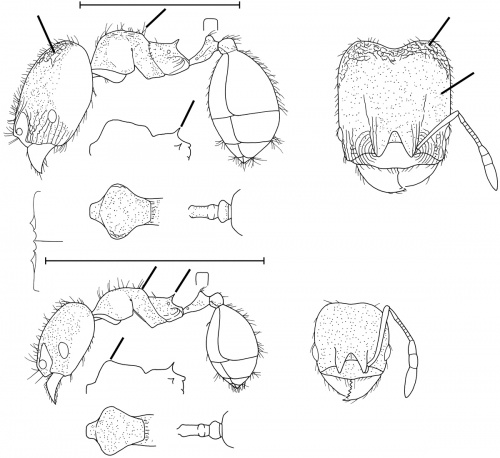 Acronymic, referring to the Organization of Tropical Studies, sponsoring organization of the La Selva Biological Station, site of the type collection.