This species occurs in wet forest habitats. Workers are common on the ground and on low vegetation. They readily recruit to baits, and major workers are often at baits with minor workers. Nests are in soil, with a simple gallery leading to a chamber about 10cm deep. The two nests that have been excavated contained single queens. A colony collected at the type locality by Stefan Cover et al. was nesting in primary rainforest in and beneath a rotten branch on the ground. (Longino 2009, 2019; Wilson 2003)

Longino (2019) - Local populations of P. plebecula vary greatly in color and sculpture. Color varies from yellow orange to dark brown, and to varying extent bicolored, with lighter head and mesosoma and darker gaster. The face of the major varies from being entirely foveolate/rugulose to completely smooth and shining. Pilosity can vary as well, with most populations having multiple pairs of stiff setae on the mesosomal dorsum, but some with no dorsal setae.

Wilson (2003) was unable to locate the type of P. plebecula and left it incertae sedis. The types were located and imaged for AntWeb by the Fisher lab. The images easily match Wilson's concept of P. texticeps.

One of the variants of this species, from Volcán Atitlán, Guatemala, was initially separated as the morphospecies JTL199. In Economo et al. (2019) the two species P. texticeps and P. JTL199 appear together, with little genetic divergence. These can now both be identified as P. plebecula.

A member of the diligens group, distinguished as follows.

Major: bicolorous; dorsal head surface between eyes and frontal carinae, from the genae almost to but not including the occiput, weakly rugoreticulate; hypostoma with 2 teeth; mesosomal convexity in side view very high, tapering to a blunt point; pronotum bilobous in dorsal-oblique view; mesosoma dorsum with a row of sparse, paired setae; gaster entirely smooth and shiny. 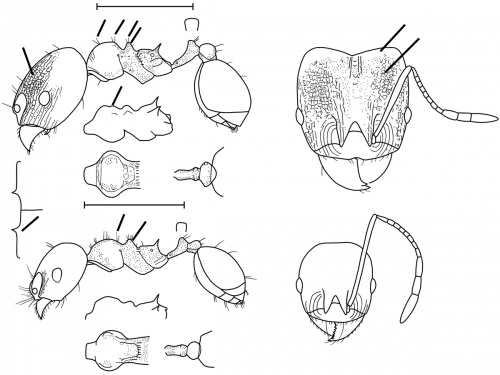