In Veracruz, protensa has been found in both lowland rainforest and in montane cafetals, i.e., forest with coffee. (Wilson 2003)

Known from the type series; from near Cuichapa, Veracruz, 1600 m; and from Tuli Creek, near San Miguel, Nicaragua. (Wilson 2003)

DIAGNOSIS A very small, yellow member of the flavens group, distinguished in the major by an elongated head entirely covered dorsally with longitudinal carinulae, which grow faint and curve inwardly in the posterior third of the head to converge toward and meet at the midline, becoming horizontal near the occiput.

Similar to Pheidole browni, Pheidole casta, Pheidole mera, Pheidole olsoni and Pheidole prolixa, but easily distinguished by the above traits. 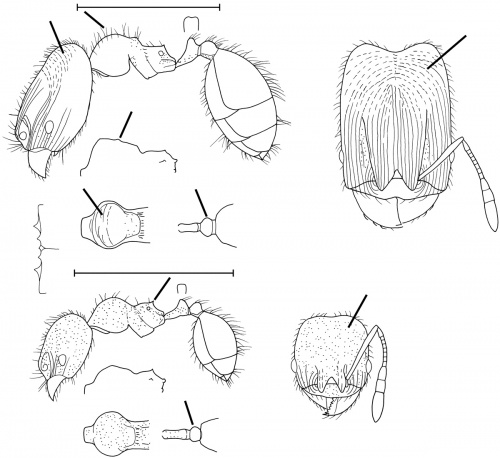 L protensa, stretched out, referring to the somewhat elongate head of the major.