All of the nests found by Creighton and reported in Creighton and Gregg (1955), as well as by Stefan Cover (unpublished notes), were in sand, especially sand subject to frequent shifting, an extreme environment avoided even by other desert-dwelling ants. The remarkable psammophore (basket-like enclosure of hairs between the head, used to carry sand or other loose particles) is likely an adaptation to the environment for which the species is specialized. Chaff piles occurred around the nest entrances of some of the nests, an almost certain sign that psammophila harvests seeds. (Wilson 2003)

The ecological responses of this ant appear to be unusually constant. Twelve colonies were found from stations whose elevation was never more than 250 feet above sea level. All the nests were constructed in areas whose dominating characteristic was an abundance of sand. The region of sand dunes, which extends through much of the Gran Desierto in Sonora and into Imperial County in California, appears to be an exceptionally difficult environment for most ants. Even the strongly xerophilous species avoid this area, presumably because the shifting sand is continually covering the nest openings. The presence of psammophila in this region indicates that the sand-dwelling habit is highly developed in this species. In areas where the sand was not shifting there were chaff piles around the nest entrances, a clear indication that psammophila is a harvester. (Creighton and Gregg 1955)

From Wilson (2003): DIAGNOSIS A member of the “bicarinata complex” of the larger pilifera group, comprising Pheidole agricola, Pheidole aurea, Pheidole barbata, Pheidole bicarinata, Pheidole centeotl, Pheidole cerebrosior, Pheidole defecta, Pheidole gilvescens, Pheidole macclendoni, Pheidole macrops, Pheidole marcidula, Pheidole paiute, Pheidole pinealis, Pheidole vinelandica, Pheidole xerophila, Pheidole yaqui and Pheidole yucatana (psammophila is closest to barbata), which complex is characterized by the large to very large, forward-set eyes of both castes; and, in the major, the occipital lobes lacking any sculpturing (except in aurea); the posterior half of the head capsule almost entirely smooth and shiny; and the postpetiolar node seen from above oval, elliptical, or laterally angulate (cornulate in cerebrosior).

P. psammophila is distinguished within the complex by the following combination of traits. 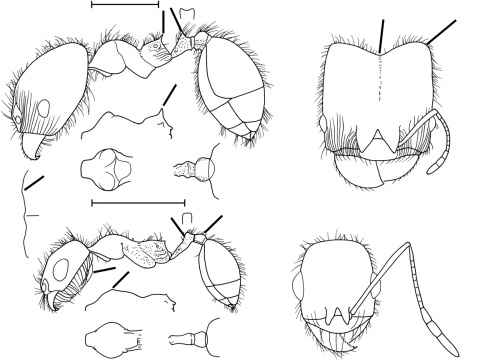