This species occurs in wet forest habitats from sea level to 1400m elevation. It is known mainly from baits on the forest floor, and occasionally workers occur in Winkler and Berlese samples. Major workers often recruit to baits along with minor workers. D. J. Cox collected a nest in standing dead wood. The type colony was collected from sifted litter, leaf mold, and rotting wood in a rainforest. (Wilson 2003, Longino 2009)

Longino (2009) - Throughout Central America a group of Pheidole share a distinctive character of the major worker: the gaster is covered with a plush layer of short, subdecumbent pubescence and any longer erect setae are absent or restricted to a few near the postpetiolar insertion. This contrasts with the rest of the body, which has a more "normal" condition, with abundant long suberect setae on the tibiae and mesosomal dorsum. In most Pheidole the general level of pilosity is similar over the body: if setae are sparse they are sparse throughout; if they are abundant they are abundant throughout, including the gastral dorsum.

Three named species are known to be in this complex, all described as new by Wilson (2003): Pheidole acamata, Pheidole potosiana, and Pheidole psilogaster. Additional collections of this complex from Costa Rica and southern Mexico allow some comments on character variation. Across all material the major workers are very uniform in habitus and there are no consistent differences in pilosity or sculpture that differentiate the three species. Thus, at this time the majors of the three species cannot be identified without associated minor workers. Two of the species, P. potosiana and P. psilogaster, have minor workers with smooth and shiny faces. The minor worker of P. acamata has a densely and uniformly foveolate face. The minor worker of P. potosiana has the dominant sculpture of the pronotum foveolate, with variable degrees of shiny patches and rugulae. The minor worker of P. psilogaster has the pronotum entirely smooth and shiny or largely smooth with some development of transverse rugulae anterodorsally. The three species show both broad and local patterns of sympatry.

The types of P. acamata from the Atlantic coastal lowlands of Nicaragua are identical to numerous collections from sites in the lowlands of northern Chiapas State, Mexico. The face and pronotum have reticulate rugae overlaying the foveolate sculpture, weak on the face and stronger on the pronotum, and the color is orange yellow. A population from one site in Chiapas near Salto de Agua is somewhat different: the minor workers have a duskier coloration and the reticulate rugulation on face and pronotum are much reduced to absent. These characters are more like P. potosiana. The two species are sympatric at Salto de Agua and are very similar there, differing only in the presence or absence of foveolate sculpture on the face.

Relatively few collections of P. potosiana have been examined. The types are from the state of San Luis Potosí, Mexico. The minor workers are uniformly red brown. The pronotum is largely foveolate, with smooth shiny patches on the side and dorsum. Collections from northern Chiapas lowlands are identical to the types or with the pronotum more uniformly foveolate, with shiny patches reduced to absent. A collection from Santa Rosa National Park in Costa Rica, in the dry forest of the northwestern lowlands, is nearly identical to the types, differing only in a somewhat darker brown coloration and slightly more developed transverse rugulae on the anterior pronotum. A few minor workers from further south in Costa Rica's Pacific lowlands are tentatively identified as P. potosiana.

Pheidole psilogaster, as here interpreted, shows considerable geographic variation in color of the body and sculpture of the pronotum. The types of P. psilogaster from Veracruz State, Mexico are nearly identical to material from the Atlantic lowlands of Costa Rica. The coloration is dark red brown and the pronotum is completely smooth and shining. Collections from the Osa Peninsula, on the southwest Pacific coast of Costa Rica, and from the northern Chiapas lowlands are yellow orange and the pronotum has faint rugulae and sometimes traces of faint foveolate sculpture overlaying the generally smooth and shining surface. Minor workers in this complex can be very similar to other species outside of the complex. For example, in the northern Chiapas lowlands Pheidole acamata and Pheidole erethizon, both very common, have currently indistinguishable minor workers.

Major: first gastral tergite covered with short recumbent hairs of even length, and anterior half also by a dense layer of short subrecumbent hairs all of approximately the same length; gastral sternites covered by dense subrecumbent hairs all of which are the same medium length; head and body concolorous light reddish brown; mesopleuron with broken short rugulae; rugoreticulum on head stretches on each side from eye to antennal fossa; carinulae extend posteriorly to eye only a little more than 2X Eye Length, except for those adjacent to midline, which travel from vertex to occiput; humerus in dorsal-oblique view subangulate. 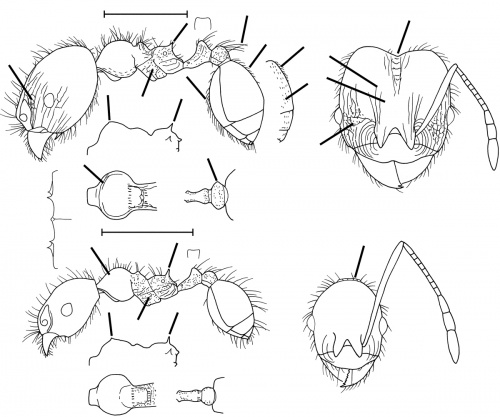