DIAGNOSIS Major: dorsal surface of the head except for c1ypeus and frontal triangle completely carinulate and foveolate; sides of the mesosoma and waist foveolate; gaster smooth and shiny; postpetiolar node laterally angulate.

Minor: head other than c1ypeus and frontal triangle, all of mesosoma, and sides of waist foveolate; occiput narrowed but lacking nuchal collar.

Longino (1997) describes the considerable geographic variation he found within Costa Rica as follows: "the shiny patch on dorsum of promesonotum is most developed on Atlantic slope specimens, is reduced on some Pacific slope specimens (Carara at 500 m, Rancho Quemado on the Osa), and absent on many Pacific slope specimens (Corcovado, Manuel Antonio, Carara at 30 m). Correlated with the reduction of the dorsal shiny spot is a change in color from dark brown to orange." I have placed light reddish brown specimens from the Arima Valley, Trinidad (600- 700 m), light reddish brown specimens from Tingo Maria, Huanuco, Amazonian Peru, and reddish yellow ("orange") specimens from Cuzco Amaz6nico, Madre de Dios, further south in Amazonian Peru, as more far flung geographic variants of the same species.

Minor: in type series, body dark brown except for slightly contrasting narrow anterior strip on the head capsule; scape and legs except tarsi light brown; funiculi and tarsi brownish yellow. Geographic variation that departs from these color patterns is described in the Diagnosis above. 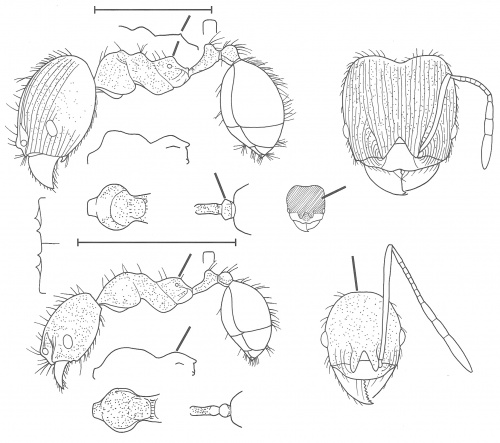 Figure. Upper: holotype, major. Above the mesosoma of the holotype is shown the outline of a paratype mesosoma, to illustrate variation in the propodeal angle within the same nest series. Lower: paratype, minor. Scale bars = 1 mm.