Stefan Cover (unpublished collection notes) found numerous colonies of rugulosa in the deserts of southern Arizona and southwestern New Mexico at 1300–1700 m, in xeric habitats ranging from grazed grassland desert to rabbitbrush-mesquite desert, mesquite-acacia dominated wash, and riverbank desert scrub. The ants usually nest in the open soil, with the entrances surrounded by either crescentic or full craters; the entrance of one nest was in a grass clump. Similar nest site preferences are reported from western Texas by Moody and Francke (1982). According to Cover, colonies may consist of several hundred individuals or more, and, unusually for Pheidole, are at least sometimes polygynous. Seeds are occasionally found in the nests. (Wilson 2003)

Mackay and Mackay (2002) - The majors of this species are small (total length about 2.5 mm, head length 1.2 mm). The anterior 1/2 of the head is longitudinally striate, the posterior half of the head is predominantly smooth and shining, the tops of the lobes have transverse striae, which extend onto the fronts of the lobes, as well as extend longitudinally on the posterior surfaces of lobes. The humeral angles are present, but are not notably developed; the connules are poorly developed. The minors are small, dark brown specimens, with a shiny head, shiny pronotum, the remainder of the mesosoma is punctate.

Gregg (1959) - Some of the majors are a bit darker in color, have more pronounced prothoracic longitudinal rugae and a slightly broader postpetiole.

Pheidole rugulosa may be distinguished from Pheidole micula, its closest relative, in the following manner: overall size a little larger; transverse occipital rugules (resembling striae) very similar to those of micula except somewhat coarser, more abundant in the cephalic sulcus, extending further onto the vertex, but absent from the upper portions of the genae; piligerous punctures on the smooth areas of the head larger and more evident; humeral bosses more prominent; transvers rugae of the pronotum extending to the prothoracic pleurae, the surface opaque: promesonotum more convex; petiolar node more truncate or straight at the summit; postpetiole wider, the lateral angles distinct though blunt (practically absent in micula).

Mackay and Mackay (2002) - These ants make small nests in the soil, with the nest entrance usually surrounded by a small mound. This species is very common near Las Cruces, but was not found in other sites in New Mexico. The nests and the specimens are small, making them easily overlooked.

Head, without the mandibles, slightly longer than broad, occipital lobes prominent but well-rounded; cephalic sulcus well-developed and rather broad toward the rear; frontal area small and depressed; clypeus with very weak median carina, its anterior border sinuate, and the median emargination very shallow. Frontal carinae short and slightly divergent. Antennae 12-segmented; scapes slender at the base, widened apically and extending 1 or slightly more of the distance from their insertions to the occipital corners; funiculus with distinct 3-segmented club whose articles are longer than broad. Mandibles stout, abruptly curved, with two apical teeth and the remaining border edentate except for a small basal denticle. Eyes with approximately 65 facets.

Promesonotum strongly convex, descending through an obtuse angle to the mesoepinotal suture, which is impressed; humeral bosses well-defined; basal face of epinotum and the declivity subequal, and joined through an obtuse angle; epinotal spines stout but pointed. Petiole with a long anterior peduncle, anterior face of the node gently sloping, posterior face vertical, and the crest blunt, transversely flat to faintly concave. Postpetiole trapezoidal, widest anterior to the middle, the lateral angles blunt, rounded, and poorly developed. Gaster truncate at the base, and slightly smaller than the head.

Sculpture: Cephalic rugules longitudinal and fine, crossing the clypeus, frons, diverging from the carinae, and extending to the vertex where they disappear; rugules present on the genae, extending from the mandibles to a little beyond the posterior border of the eyes, and on the lateral aspects also of the gula. Transverse rugules or striae cross the occipital lobes and converge into the cephalic sulcus. Vertex, upper portions of the genae, and middle of the gula smooth and shining. Piligerous punctures coarse and deep. Dorsum of the pro-mesonotum longitudinally rugose, front of pronotum transversely rugose, subopaque to weakly shining; prothoracic pleurae longitudinally rugose-punctate, mesopleurae and epinotal pleurae punctate and opaque. Epinotal base and declivity punctate and opaque; one or two interspinal rugulae. Petiole punctate and opaque; postpetiole punctate laterally but smooth and shining dorsally. Gaster smooth and shining.

Head a little longer than broad, occipital border feebly concave, clypeal border straight, clypeus ecarinate, frontal area depressed, frontal carinae straight to faintly divergent. Antennal scapes like those of the major, except they reach almost to the occipital corners. Eyes with about 50 facets.

Sculpture: Head smooth and shining except for a few striae on the sides of the frons associated with the frontal carinae, and a few rugules with weak inter rugal punctures on the genae between the eyes and the mandibles. Pronotum and propleurae for the most part smooth and shining, rest of thorax, petiole, and sides of postpetiole punctate, opaque. Dorsum of postpetiole and gaster shining.

Pilosity: Similar to that of the worker major.

Head broader than long, occipital border almost flat, sides straight. Clypeus ecarinate, anterior border weakly sinuate. Frontal area small, depressed and pear-shaped. Frontal carinae small and slightly divergent. Antennae like those of the soldier; scapes reaching ¾ of the distance from their insertions to the occipital corners. Eyes large, convex, and composed of 180 or more facets; placed in front of the middle of the head. Ocelli large and prominent.

Thorax flat dorsally, as wide as the head through the wing insertions, and tapering posteriorly to the epinotum. Scutum, scutellum, metanotum, and epinotum all separated by well-marked sutures. Epinotal base slightly shorter than the declivity, and both joined by a depressed trough with no angle. Epinotal spines stout, blunt, and directed upward and backward. Petiole with moderate peduncle, and narrowed but blunt and flat-crested node. Postpetiole transverse, almost 1 and ½ times as wide as the petiole, and with blunt, subconnular lateral angles.

Sculpture: Entire upper surface of head (except clypeus and frontal area which are shining) furnished with longitudinal rugae which are divergent on the occiput, and which become reticulate on the genae and the occipital corners; opaque. Cephalic punctures coarse; interrugal sculpture weak. Clypeus crossed with fine, longitudinal striae which do not dull the surface. Gula smooth and shining. Mandibles coarsely punctate, shining. Dorsum of thorax smooth and shining except for coarse, deep, scattered, piligerous punctures. Sides of prothorax and epinotum longitudinally rugose, the remainder of thorax smooth and shining. Epinotal base with rugae transverse and also converging toward the bases of the spines. Petiole and postpetiole punctate and weakly shining. Gaster slightly shagreened.

Pilosity: Like that of the major; pubescence limited to the legs and antennae.

Color: Similar to that of the major.

Head, as measured through the eyes, much broader than long. Eyes so large they occupy most of the sides of the head, and contribute to the broad, fiat, anterior margin of the head, the mandibles (when closed) and the clypeus hardly projecting. Sides of head behind the eyes converging rapidly to the occiput, which is almost fiat. Vertex surmounted by prominent ocelli. Antennae 13-segmented; scape short, about equal in length to the first two funicular segments. Second funicular segment globular. Mandibles with two, weak, blunt denticles.

Color and pilosity: As in the other castes, except legs, mandibles, antennae and genitalia are yellow. A male from Naco, Arizona, is slightly larger, darker in color and has more definite epinotal denticles.

Wilson (2003): DIAGNOSIS A member of the “pilifera complex” of the larger pilifera group; for a characterization of the complex, see under Pheidole pilifera.

P. rugulosa is distinguished within the complex by the following combination of traits.

Major: rugulae on occiput seen in full-face view limited to a narrow strip; longitudinal carinulae originating on the frontal triangle travel all the way to meet the occipital rugulae, but other cephalic carinulae do not reach beyond the midpoint of the head capsule; anterior strip of the pronotum transversely carinulate; mesonotal convexity very low; postpetiole seen from above laterally angulate.

Throughout much of southern New Mexico and Arizona, P. rugulosa occurs with Pheidole soritis, with which it is easily confused. P. rugulosa is most easily distinguished from that species by the major’s well-developed humeral angles, which are inconspicuous and rounded in soritis, and the large shiny areas on the posterior dorsal surface of the head, which is variably sculptured in soritis. 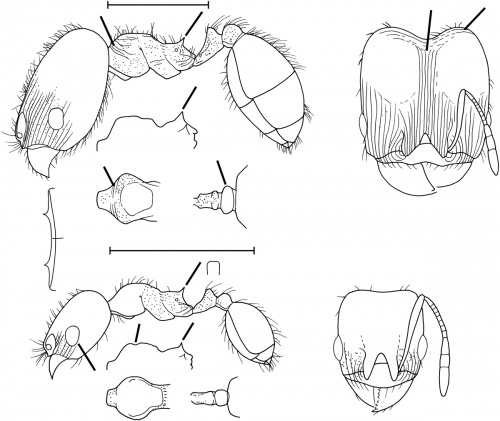