A colony found in Hidalgo County, New Mexico, by Stefan Cover (unpublished field notes) was in open desert with scattered mesquite, yucca, and Ephedra, occupying a soil nest with an entrance in a grass clump. A second colony was discovered by Cover nesting in open soil near Pecos, Texas, in saline desert among growth of Limonium and Salicornia. Nests reported by Moody and Francke (1982) in western Texas were at 600 to 1700 m and variously under stones and in open soil. (Wilson 2003)

The major of this species can be recognized by the flattened area at the base of the scape, the long scape, the rough sculpture over the entire dorsal surface of the head, and the coarse, transverse pronotal rugae, with the intrarugal spaces shining. The petiolar notch is shallow, but broad, the hairs on the gaster are long, nearly of equal length, blunt, and widely spaced. The head of the minor is smooth and shining, the postpetiole is globular and less than twice the width of the node of the petiole. (Mackay and Mackay 2002)

This species nests in the soil, with the entrance surrounded by a small mound.

From Wilson (2003): A member of the fallax group, somewhat similar to Pheidole optiva of Mexico, distinguished as follows.

COLOR Major: body light reddish brown except for gaster, which is plain medium to dark brown. 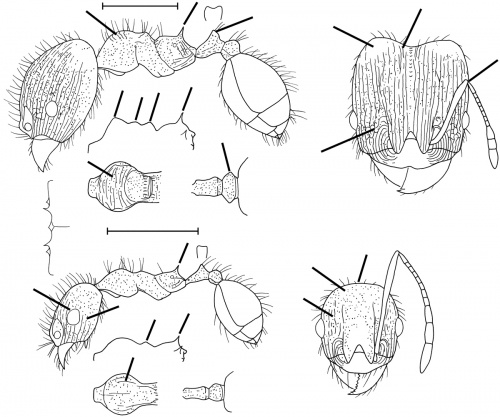