Nothing is known about this ant’s biology.

From Wilson (2003): In addition to the types from Las Villas Province, I have seen specimens from Sierra de Mesa, Pinar del Rio, also in Cuba, col. Jorge Fontenla. 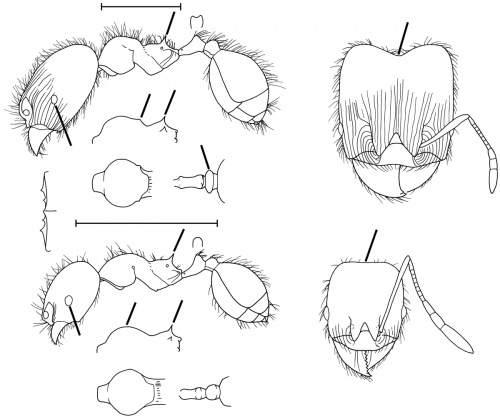 Major Length 2.5-3 mm. Related to Pheidole floridana Emery. Head large, subrectangular, without the mandibles distinctly longer than broad and distinctly narrower in front than behind, with distinct occipital inpression and rather deeply and angularly excised posterior border. Eyes small, at the anterior fifth of the sides, which are rather convex. Clypeus ecarinate, moderately convex posteriorly, its anterior border broadly and very feebly excised in the middle and narrowly sinuate on each side. Mandibles convex but with nearly straight external borders, their apical borders with two large terminal and two small basal teeth. Frontal area distinct, subtriangular, rounded behind; frontal carinae rather strongly diverging posteriorly where they are twice as far apart as each is from the lateral border of the head, as long as the antennal scapes and forming the mesial borders of narrow, shallow, scrobe-like impressions. Antennae slender; scapes curved at the base, reaching only to the middle of the sides of the head; clubs longer than the remainder of the funiculi; joints 2-8 slightly longer than broad. Pronotum half as broad as the head, forming with the mesonotum a convex, hemispherical mass, with rounded humeri and feeble mesonotal torus; epinotum much lower, as broad as long, marginate on each side, rather concave and sloping in the middle; the spines stout, not very acute, suberect, as long as their basal diameter but shorter than their distance apart. Peduncle of petiole rather short, anterior and posterior faces of node concave, its superior border rather thick and blunt, emarginate when seen from behind. Postpetiole more than twice as broad as long and as broad as the petiolar node, its sides produced at the middle as acute angles, which are not conulate as in floridana. Gaster broadly elliptical, about as large as the head. Femora only moderately thickened.

Shining, with sparse, piligerous punctures, which are largest on the mandibles and posterior half of the head; somewhat more than the anterior half of the head rugose, the rugae fine, sparse, and diverging on the front, coarser, more reticulate and longitudinal on the cheeks and also coarse but more oblique or concentric around the antennal insertions. Scrobe-like impressions nearly smooth, with only a few short, longitudinal rugules. Remainder of body smooth, except for the small, scattered, piligerous punctures.

Black or dark brown; cheeks, antennae, clypeus, neck and mandibles, except their apical borders and tips, testaceous; legs, including the coxae, more brownish yellow, middle of femora and tips of antennal scapes brown.

Head subrectangular, broader in front than behind, with feebly convex sides and slightly concave posterior border. Eyes at the anterior third of the sides, shorter than their distance from the anterior corners. Mandibles with multidenticulate apical border and long apical tooth. Clypeus convex behind, with medially straight, transverse anterior border. Frontal area distinct, triangular, not impressed. Antennal scapes extending about twice their greatest diameter beyond the posterior border of the head. Thorax shaped as in the soldier, but the promesonotum is less convex; mesoepinotal impression deep, base of epinotum slightly convex in profile. Node of petiole narrow, subconical, without emargination. Postpetiole subglobular, as long as broad, with the sides very feebly angulate anteriorly, less than half again as broad as the petiolar node. Legs rather long.

Pilosity whitish, like that of the soldier, but sparser, short and bristly on the antennae and legs, long on the dorsal surface of the body.

Black or dark piceous; mandibles, antennae and remainder of legs paler, yellowish brown, except the middle portions of the femora which are dark brown.