Since its description this species has subsequently been found a number of times and its distribution is now known to include Nicaragua.

Wilson (2003) - During intensive and independent bouts of collecting at the La Selva Biological Station, Stefan Cover and John T. Longino each found it only once. I later returned to the same spot in the forest where Cover collected the holotype nest series, and despite a close search in the vicinity failed to discover another colony. Males were present with the holotype series, on 27 March.

Minor: pilosity sparse, with many of the hairs along the dorsal profile of the head and body clavate; entire head and body foveolate; anterior third of first gastral tergite shagreened; occiput narrowed, with nuchal collar.

Both castes are tricolorous (see below). 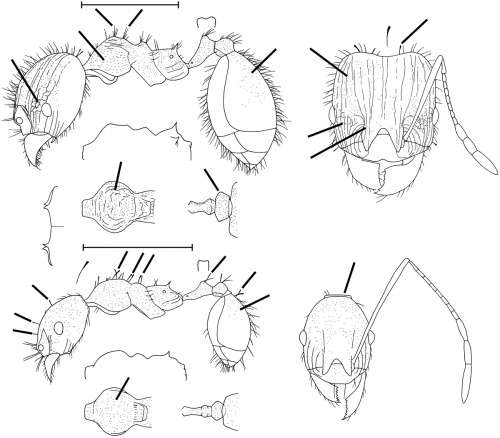