This species can be recognized as the base of the scape is flattened, with the dorsal surface slightly concave; and the scapes extend about 2/3 of the distance to the posterior lateral corners. The flattened area of the scape is about equal in width to the diameter near the apex of the scape. The anterior 2/3 of the head is roughly sculptured, with coarse, reticulated rugae, with the intrarugal spaces punctate. The posterior 1/3 of the head is finely sculptured and moderately to strongly shining; the tops of the posterior lateral lobes have only piligerous punctures and are glossy and shiny. The dorsum of the pronotum is finely sculptured, and mostly smooth and glossy. The posterior 1/2 of the mesonotum is swollen into a protuberance; the propodeal spines are moderately slender, and well developed. The lateral connules on the postpetiole are poorly developed. Most surfaces of the minor worker are densely and evenly punctate, only the central portion of the head and the side and dorsum of the pronotum are smooth and glossy. The gaster is smooth and glossy. (Mackay and Mackay 2002)

This ant nests in soil, with entrance surrounded by a small mound. Workers are group foragers. 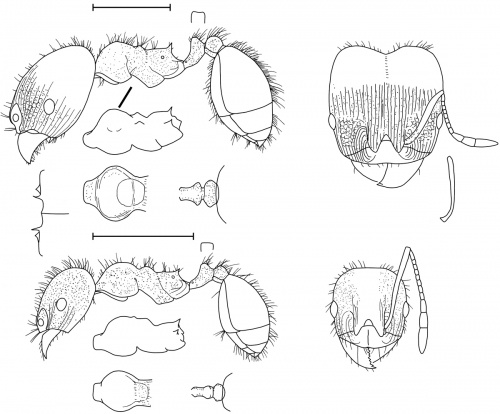