The species occurs in desert scrub and deciduous thorn forest, nesting under stones. As suggested by Creighton and Gregg (1955) and proved by Feener (1988), titanis is primarily a specialized predator on termites. In Jalisco, Feener found the species most often attacking foraging columns of Nasutitermes, only occasionally scavenging for dead arthropods of other kinds. Scouts recruit nestmates until a raiding force of 200–2000 majors and minors are assembled, encircling the termites, whereupon each ant tries to seize individual prey, then returns to the nest along the chemical recruitment trail. Feener has provided a detailed account of both the raiding behavior of titanis and their defensive maneuvers against enemies, especially parasitic phorid flies. (Wilson 2003)

In his original description of Pheidole titanis Wheeler observed that it prefers to nest under large boulders or where the soil is full of good-sized stones. It also seems to prefer nest sites near streams in canyons. The nest is usually placed near the top of the bank ten feet or more above the stream bottom. In the three nests which were excavated there was no evidence that the insects had been collecting seeds. But there is ample evidence that titanis eats termites. The colony taken at Sweetwater did so avidly; indeed, they would snatch their victims from between the tips of the tweezers by which the termites were presented to them. The colony taken in Brown Canyon was discovered when a column of majors and minors, most of them with termites in their jaws, was returning to the nest. (Creighton and Gregg 1955)

From Wilson (2003): DIAGNOSIS A large member of the pilifera group further characterized by the following traits.

Major: rugoreticular patch just mesad of each frontal carina and posterior to the antennal fossa; the rest of the dorsal surface of the head except for the occiput, central piece of the clypeus, and frontal triangle longitudinally carinulate; median carina present on the clypeus; carinulae cover anterior third and sides of the pronotal dorsum, part of the propodeal dorsum, sides of the petiole, and dorsum of the postpetiolar node; postpetiolar node from above diamond-shaped. 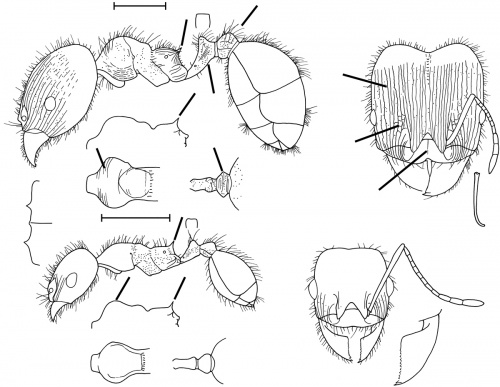 Head proportionally small, hardly larger than the gaster, a little longer than broad, excluding the mandibles, subcordate, somewhat broader behind than in front, with prominent rounded posterior corners; posterior border deeply excised in the middle. A deep groove extends from this excision to the frontal area. Mandibles robust, convex, with flattened, edentulous, and nearly straight blades which terminate in two prominent apical teeth. Clypeus short, its anterior border deeply excised in the middle, feebly and sinuately concave on either side; median surface rather flat and depressed. Frontal area triangular, as long as wide. Frontal carinae long, diverging, continued backward nearly to the middle of the head. Antennae very small, scape distinctly flattened but hardly incrassated, reaching only to a little beyond the posterior orbit; funiculus slender, its joints all decidedly longer than broad, club very short and indistinctly marked off from the remainder of the funiculus. Eyes moderate, round, at about one third the distance from the anterior to the posterior border of the head. Thorax robust; pronotal angles obtusely rounded; mesoepinotal constriction rather deep; epinotal declivity concave; spines robust, pointed, longer than broad at the base and farther apart than long; slightly curved downwards at their tips. Petiole pedunculate, seen from above constricted near the middle; in profile the dorsal surface is concave in front, convex on the anterior surface of the node, posterior declivity straight and abrupt; upper margin of node distinctly concave in the middle when seen from behind. Postpetiole transversely elliptical from above, nearly twice as broad as long and fully twice as broad as the petiole, with distinct but not very prominent lateral angles near the middle; in profile the dorsal surface is very convex, the ventral surface much more flattened. Gaster elongate elliptical, rather large. Legs long, femora conspicuously incrassated in the middle, the tibiae towards their distal ends.

Mandibles smooth and shining, with a few scattered piligerous punctures and some pronounced striae on the outer basal margin. Clypeus shining in the middle, more opaque at the sides which are coarsely longitudinally rugose. There is a prominent median ruga. Frontal area shining, with a median carinula. Head subopaque covered with rather coarse, parallel, longitudinal rugae over the anterior three quarters, posterior fourth smooth and shining, with a few scattered and shallow foveolae. Spaces between the rugae fined with minor reticulations which extend back somewhat beyond the ends of the main rugae on to the smooth occipital .surface. Thorax subopaque, pro- and mesonotum more shining, pronotum and sides of mesonotum with several sharp transverse rugae. Mesopleurae and whole epinotum coarsely punctate rugulose. Petiole and postpetiole opaque, punctate rugulose throughout. Gaster hardly shining, as its surface is finely reticulate and irregularly and rather densely punctate; only the basal portions of the segments where they are overlapped by preceding segments when the gaster is not distended, are smooth and shining. Antennae and legs smooth and shining, scape, tibiae, and femora with scattered piligerous punctures.

Whole insect covered with rather long, coarse, yellow hairs, which are erect or suberect on the body, antennal scape, and legs, but shorter and less conspicuous on the funiculus and tarsi.

Head, excluding the mandibles. as broad as long; posterior angles rounded. Mandibles with two prominent apical teeth and the remainder of their blades finely crenulate. Clypeus short, its anterior border straight, faintly and sinuately excised in the middle, posterior median surface strongly convex. Frontal area triangular, rather indistinct. Antennae slender. scape slightly thickened distally. extending beyond the posterior corner of the head to a distance about one third of its length; funiculus with all its joints distinctly longer than broad, joints 2-7 subequal, fully twice as long as broad; club appearing 4-jointed as the 8th joint forms a transition between the basal and terminal joints. Thorax much like that of the soldier. but with less robust and narrower prothorax; epinotal spines more slender, straight and pointed. Petiole slender, more than twice as long as broad, node rounded, hardly transverse. Postpetiole as long as broad, campanulate, nearly twice as broad as the petiole. Gaster and legs of the usual shape.

Smooth and shining; mandibles, head, and gaster with sparse piligerous punctures; head in front of eyes longitudinally rugose as is also the region between and next to the frontal carinae. Mesopleurae, epinotum, ventral and lateral surfaces of the petiole and postpetiole subopaque, reticulate punctate.

Pilosity similar to that of the soldier but less abundant. 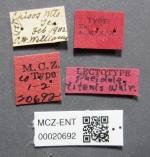 Chisos Mts., Brewster Co., southwestern Texas. Described from numerous specimens taken in the Paisano Pass, Brewster County, by myself, and in the Chisos Mts. by Judge O. W. Williams. The single nest found in the Paisano Pass was between huge immovable boulders embedded in the soil, so that I could secure only the workers, but Judge Williams obtained great numbers both of the soldiers and workers from a large nest under a stone near the foot of the Chisos.