Longino (1997): known only from the Peñas Blancas Valley, where it nests in globular ant gardens in wet forest clearings. E.g.: “carton/soil fiorii-like nest on low vegetation. Polydomous, with one nest enveloping stems of shrub, second nest less than 1 m away on underside of Xanthosoma leaf. First nest was covered with small dicot seedlings, all at the cotyledon stage. . . A well developed ant garden in front of house, with large epiphytes. Nest about half the size of a soccer ball, discrete and irregularly spherical, on stem of Urera . . . I later saw more of these ant gardens, with the same Pheidole and the same epiphytes.” Winged queens were present in one nest 21 June 1991.

Upper elevation of the Cordillera de Tilaran, on the Atlantic slope of Costa Rica (Longino 1997).

Minor: body and head light brown with unusual local bluish reflections in certain lights. Similar to boruca of Costa Rica but that species is darker colored, lacking bluish or violaceous reflections in the minor; and the major has a foveate occiput, more extensive outward curving carinulae on the head, and rounded pronotal humeri in dorsal-oblique view.

Minor: body and appendages concolorous light brown except tarsi, which are yellow; bluish to violaceous reflections occur over most of the body in certain angles of light, in small patches at a time. 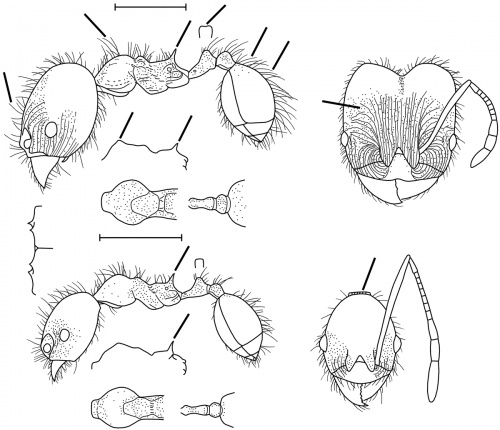 L violacea, violet-colored, referring to the bluish to violaceous reflections of the minor body.