The only species in this genus with ergatoid (= permanently wingless) queens. 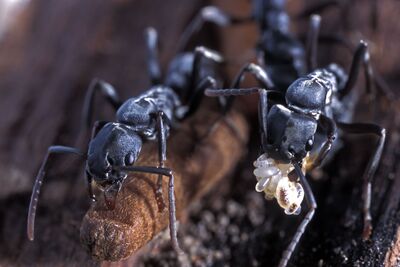 Workers and brood of P. conradti in Ivory Coast. Photo by Patrick Landmann.

Consistent with an arboreal life, P. conradti is not only predaceous but feeds on nectar (Dejean and Suzzoni 1997).

Molet and Peeters (2006) - Platythyrea conradti is the only species in this genus with ergatoid (= permanently wingless) queens. Colonies lack gamergates (unlike other species in this genus), yet aggressive interactions among queen and workers define a hierarchy. A single fertile queen has the top rank and highranking workers do not lay eggs, except when the queen dies. Colonial reproduction by both alate queens (independent foundation) and gamergates (fission) seems the ancestral state in Platythyrea. Independent foundation can be selected against in some species, causing the loss of alate queens for economic reasons. Thus gamergates become the only reproductives, except in P. conradti in which queens became ergatoid. Gamergates and ergatoid queens are two mutually redundant reproductive phenotypes that allow colonial reproduction by fission. 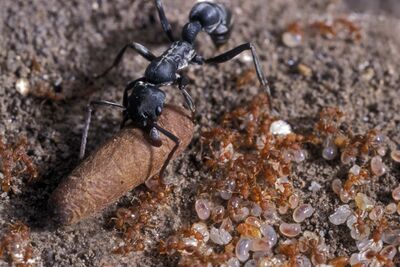 Dejean (2011) studied the predatory behavior of Platythyrea conradti, an arboreal ponerine ant. The workers, which hunt solitarily only around dusk, are able to capture a wide range of prey, including termites and agile, nocturnal insects as well as diurnal insects that are inactive at that moment of the Nyctemeron, resting on tree branches or under leaves. Prey are captured very rapidly, and the antennal palpation used by ground dwelling ponerine species is reduced to a simple contact; stinging occurs immediately thereafter. The venom has an instant, violent effect as even large prey (up to 30 times the weight of a worker) never struggled after being stung. Only small prey are not stung. Workers retrieve their prey, even large items, singly. To capture termite workers and soldiers defending their nest entrances, ant workers crouch and fold their antennae backward. In their role as guards, the termites face the crouching ants and end up by rolling onto their backs, their legs batting the air. This is likely due to volatile secretions produced by the ants’ mandibular gland. The same behavior is used against competing ants, including territorially dominant arboreal species that retreat further and further away, so that the P. conradti finally drive them from large, sugary food sources.

It is interesting to note that while nearly all examined Platythyrea species have gamergates, P. conradti lacks these and is the only species known to have ergatoid queens in this genus (Lévieux 1976, Molet & Peeters 2006). Caste dimorphism is extremely limited in P. conradti: ergatoid queens and workers have the same thorax volume and a mean of 18-20 ovarioles, but the queen gaster is bigger. Queens and workers aggressively interact to form a dominance hierarchy, but high-ranking workers only lay unfertilized eggs (=males) after the queen dies. A sample of 106 workers were dissected, and all had a spermatheca lacking sperm. 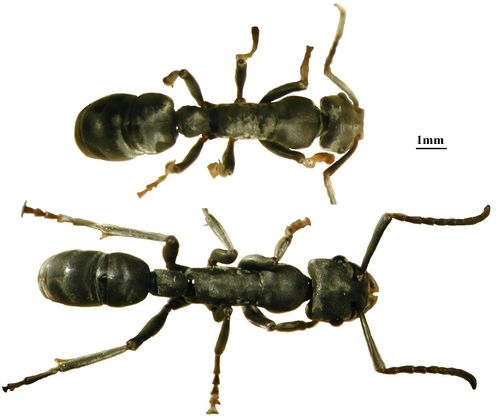