Typically constructs cryptic nests in stony soils, they are small and difficult to locate. Nest entrances may be a plain hole or with a small (10 cm diameter) mound of soil. Colonies are small, from perhaps eighty to a few hundred workers. A founding female was collected in July. Although they are large individuals, they are not as aggressive as others in the genus.

Pogonomyrmex apache is readily distinguishable in all castes from its closest relatives. The excised clypeus is distinctive, as is the very short declivity of the propodeum of the worker. Within its complex, only apache has the propodeal declivity so short in the worker and transversely rugose in the worker and female; in other species the declivity is smooth and strongly shining. From all known North American species of Pogonomyrmex, the male of apache differs materially by its distinctive paramere and, except from that of bicolor, by its strongly shining, concolorous black body.

Cole (1968) - Although Pogonomyrmex apache generally constructs obscure nests in stony soils with no superstructure to mark a colony, sometimes it builds circular craters in very sandy soil. A few nests of the latter type were found by the writer at the station near Road Fork, New Mexico. Colonies are generally small and only contain upward of about eighty workers. The inoffensive workers forage at an erratic, hesitating gait which is wholly unlike that of other members of its complex. The movements are somewhat similar to those of Pogonomyrmex maricopa. For a more detailed account of the habits of apache the reader is referred to a previously published description (Cole 1954b pp. 268-9).

Since my earlier paper on apache, I have made numerous additional collections of this species in Texas, Arizona, and New Mexico. Nests are common near Ozona, Sheffield, and Ft. Stockton, Texas. I found a single stray worker near Lake Mead, Nevada, and two nests at a station fifty-four miles north of Hermosillo, Sonora, Mexico. Gregg (1963. p. 319) has published an interesting record of apache from Canyon City, Fremont County, Colorado, at an elevation of 5,333 feet. This is the most northern station known for the species. The nest was found in a meadow within a pinyon-cedar area. There is also a record from Morton County, Kansas, at an elevation of 3,200 feet, but inasmuch as I have been unable to locate either the specimens involved or the exact source of the record, the authenticity must remain questionable.

Cole (1968) - Additional studies of apache have confirmed my previous conclusion (Cole, 1954b, p. 267) that the populations which were named apache Wheeler and sancti-hyacinthi Wheeler are conspecific. As a matter of fact, on Fisher Hill, Ft. Davis Mountains Texas I found colonies answering to both descriptions. Pogonomyrmex apache is a highly variable ant in the worker caste, and it is easy to see how Wheeler (1902a, pp. 388, 392) could have described it under two names, especially since relatively few specimens had been collected at that time.

Base of antennal scape similar to that of Pogonomyrmex barbatus, but bend of shaft a little more constricted and somewhat flattened; longitudinal peripheral carina very strong, its proximal portion greatly elevated and extending to the basal flange, that pan of the carina bordering the lateral impression of inferior lobe very high and forming, together with incorporated portion of basal flange, a very prominent, deep, subtriangular trough that slopes toward the unflanged inner margin of the basal enlargement; point absent; apex of superior lobe rather blunt.

Medio-anterior portion of frontal lobe of head strongly elevated from adjoining peripheral part of median lobe of clypeus, the two forming nearly a right angle and producing a deep impression for the median clypeal lobe and adjacent frontal area, the frontal area being a pit with steep sides; lateral clypeal lobes very narrow and angularly produced anteriorly in the form of a prominence with sharply rounded apex; anterior margin of median clypeal lobe moderately to strongly excised, the impression being from broad and shallow to narrow and very deep, often extending nearly to level of frontal lobes.

Body color varying from a rather uniform bright orange to a concolorous, medium to deep, ferrugineous red.

Cephalic features similar to those of the worker. Thoracic rugae denser and coarser than those of the worker; longitudinal except on collar and anterior declivity of pronotum and on epinotal base and declivity where they are transverse; more widely spaced on epinotum than elsewhere; sparse or absent from the nearly smooth and shining scutellum where they are often replaced by sparse, faint, uneven, broken striae. Epinotum without armature or with a pair of minute denticles. Interrugal sculpture of thorax similar to that of the worker. Venter of petiolar peduncle with a prominent blunt process. Dorsum of peliolar node, in lateral view, flattened or only faintly convex, the apex rather acute. Postpetiolar ventral process only moderately well developed. Sculpture of petiolar and postpetiolar nodes similar to that of the worker, but the surface generally shagreened, smoother and more highly polished. Gaster shining, very finely shagreened. Body color a ferrugineous red; the first gastric segment usually with a posterior, uneven, infuscated, transverse band, other segments generally with narrower and fainter such bands.

Mandible as shown in Pl. VIII, Fig. 12; similar to that of barbatus, but blade notably narrower, its apical margin straighter, basal angle weaker, apical tooth broader and blunter, and basal teeth more weakly developed, usually with only the first one discernible. Length of antennal scape approximately equal to, or a little longer than combined lengths of first and second flagellar segments; apical segment of flagellum about twice the length of penultimate segment which is distinctly longer than broad. Anterior margin of median clypeal lobe rather deeply and broadly excised.

Petiole in profile with a short anterior peduncle, the ventral tooth of which is blunt and poorly developed; the node with convex sides, anterior and posterior surfaces, and apex; viewed from above the node is subglobular and somewhat narrower than the postpetiole which, when viewed from above, is subtrapezoidal. Upper surface of petiolar node rather smooth and shining, with a few, fine punctures and numerous, coarser, piligerous ones. Posteriodorsal and posteriolateral margins of petiole dull and finely granulose. Postpetiole smooth and very shining, with a few, scattered, fine punctures and more numerous, coarser, piligerous punctures.

Erect hairs long, numerous, rather uniformly distributed, curved, attenuated, and light yellowish gray; sparser on dorsum of scutum and scutellum; absent, or nearly so, from entire median portion of declivous face of epinotum; somewhat shorter on posterior half of gaster and occurring chiefly along posterior border of each segment. Hairs erect and suberect on antennal scapes and first four funicular segments, usually fully appressed on remaining segments and with only an occasional hair suberect.

Paramere as shown in PL. X, Fig. 12 and Pl. XI, Fig. 13; terminal lobe deeply and broadly excised on inner surface, the strong concavity fringed with a wide band of long, dense, reflexed, rather fine, still, golden hairs; outer margin of terminal lobe with scattered, rather widely spaced, short, straight, erect, delicate, golden hairs arising from large punctures; inner margin of terminal lobe with a prominent lobe and anterior to it a smaller, spinelike, process, the margin between the two deeply and broadly concave; distal margin of paramere truncate and crenulate. 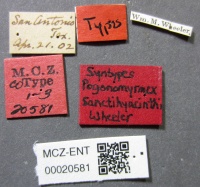