The habits of Pogonomyrmex maricpa and Pogonomyrmex californicus can be very similar. Nest type, habitat, colony strength, and foraging behavior are often nearly identical. But, whereas californicus seems always to construct a semicircular or circular sand crater, maricopa nests may be surmounted by sand or pebble craters or sand domes with a surface covering of gravel. Both species nest in open areas. (Cole 1968)

Cole (1968) - P. maricopa has an extensive range not only in longitude but also in latitude, for it extends from southern Colorado to well within Sonora, Sinaloa, and Chihuahua, Mexico. The typical form is abundant in southern New Mexico. The workers of this population have either an unarmed epinotum or one with angles or short spines, as do also the types of maricopa from Alamogordo, New Mexico (Pl. VI, Fig. 11). But maricopa s. l. exhibits a considerable degree of intraspecific variation.

The closest relative of Pogonomyrmex maricopa seems to be Pogonomyrmex californicus. Creighton (1950. p. 127) refers to the cephalic sculpture of maricopa as being "heavy and dense" and to the thoracic sculpture as being "heavier than that of californicus." If he means by "heavy" a coarser rugosity, I cannot agree with him; for when one compares the rugae of maricopa with those of californicus, those of the latter are certainly coarser. The "typical" maricopa worker with its closely spaced, comparatively fine cephalic rugae and densely punctate interrugal spaces is in strong contrast with the " typical" californicus worker with widely spaced, coarse rugae and smooth, strongly shining interrugal areas. Densely punctate californicus workers, however, are often difficult to separate from those of maricopa; the converse is also true. In such specimens the conformation of the mandible, scape base, thorax, petiole, and postpetiole may be quite similar. Rugosity and color may be virtually the same; but the thoracic dorsum of maricopa is generally more uneven, and invariably, it seems, the sides of the epinotum bear at least some distinct punctures, whereas those of californicus are smooth and shining.

The sexes of the two species are more readily distinguishable from each other. In the female of maricopa the interrugal spaces of the head bear faint to prominent punctures; in the Pogonomyrmex californicus female these spaces are smooth and strongly shining. The mandible of the Pogonomyrmex maricopa male generally bears 4 or 5 teeth, whereas that of the californicus male usually has only 2 or 3. In any caste, if the epinotum bears armature the specimen is not referable to californicus. Such specimens are readily identifiable; but, unfortunately, maricopa is commonly completely unarmed. It is indeed usually true, as Creighton (1950, p. 127) states, that "the epinotum of maricopa is more angular than that of californicus" in the worker caste; but the difference is sometimes more subtle than the words indicate.

Pogonomyrmex comanche, to which maricopa is also closely related, is easily distinguishable from maricopa by its flattened and generally longitudinally depressed dorsum of the petiolar node which bears strong, usually transverse rugae.

This species is found in all communities of the Chihuahuan Desert, especially areas with sandy soils. This is one of the few species which can nest in loose sands, such as at White Sands National Monument. (Mackay and Mackay 2002)

This species usually has nests very similar to those of Pogonomyrmex californicus, and usually occurs in sandy soils. In some areas, for example the sandy soils east of El Paso, TX, the nests are immense, with clearing up to 7 meters in diameter with the mounds approaching 2 meters in height. Typical nests are also found in the same area. Unfortunately most of these nests have been eliminated by urbanization, and will probably be completely eliminated in the future. These ants are extremely pugnacious and have a very painful sting. Flights occur from June to August, new colonies are formed in July - October. They are individual foragers collecting seeds, excrement and dead insects. The myrmecophilous scarabaeid beetle genus Cremastocheilus occurs in the nests. (Mackay and Mackay 2002)

Nevada, Wheeler and Wheeler (1986) - We have 16 records from 13 localities in the southern part of the state; 500-3,400 ft. All are from the Hot Desert (1 from a cottonwood grove and 2 from disturbed areas). The superstructure of 3 nests consisted of gravel. One was a large (51 x 91 cm) irregular mound with 3 horizontal slit-like entrances; 2 had piles of tailings below slit-like entrances. The piles of tailings fanned out to 38 cm and 61 cm; the entrances were 12 mm high and 38 mm wide.

Base of antennal scape as illustrated in Pl. IV, Fig. 7; basal enlargement very weak, superior lobe undeveloped, inferior lobe weakly developed; superior lobe with a very short declivity, the shaft meeting the prominent but very thin basal flange at a strong angle; basal flange curved distad, extending along scape base from lip to apex of superior lobe from which it is directed distinctly outward, lip narrow, extending outward for only a short distance curved slightly distad, its outer margin thin; basal impression shallow but distinct because of steep declivities that enclose it; longitudinal peripheral carina and point very weak to absent.

Mandible as shown in Pl. VIII. Fig. 7; with 3 to 5 (usually 4 or 5) teeth. Antennal scape either only slightly or not at all longer than combined lengths of pedicel and first three flagellar segments. Head rather uniformly, finely, and densely rugose; with a distinct, longitudinal carina extending from midoccipital margin to just behind ocelli. Anterior declivity of pronotum, in lateral view, concave, meeting the pronotal collar at a well-rounded angle. Epinotum unarmed or with a pair of angles, tubercles, or short spines. Ventral process of postpetiole very weak. Thorax, except epinotum, mostly finely rugose; epinotum smooth and shining. Interrugal spaces of head and thorax largely without punctures; shining or subopaque. Dorsum of petiolar node weakly to strongly impressed. Petiolar and postpetiolar nodes and gaster smooth and shining; gaster not shagreened. Paramere as shown in Pl. X. Fig. 8 and Pl. XI. Fig. 8. Head. Thorax, petiole, and postpetiole deep brownish black; gaster, antennae, and leg extremities notably lighter; first segment of gaster often infuseated basally. 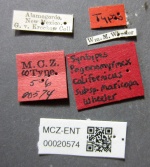