Bolton (1973) - Ground nesting ants inhabiting savannah and rather arid regions, more rarely penetrating into scrub forest. The nests are described by Wheeler (1922a:262) as being excavated directly into a sandy substrate at the base of a tuft of grass, the entrance hole being surrounded by a wide crater of discarded sand grains (Arnold (1924:746) also notes that the species nests under rocks and that the entrance was “surmounted by a wall of woven material, which also lined the first three or four inches of the gallery”, a feature also noted by Wheeler.

A member of the Polyrhachis militaris species-group.

Bolton (1973) - At the present time Polyrhachis gagates may be considered as a reasonably distinct, variable species but its relationships to other members of the complex, especially Polyrhachis militaris and Polyrhachis schistacea stand in need of further investigation. Suffice to say that variation within the species occurs chiefly in degree of convexity of the eyes, density of pubescence, intensity of sculpturation, location of erect hairs and in details such as length of petiolar and propodeal spines and the glossiness of the integument, which on the head and alitrunk may range from dull black to very shining. Intergrades between all the described infraspecific forms exist and individual variations may be seen in members of the same colony. A single worker from Kenya shows an eye shape and distribution of erect hairs more typical of schistacea but in all other respects resembles gagates. This may represent a genuine hybrid or may be an extreme individual

A ground-nesting species that inhabits savannah. One nest was completely excavated during Ant Course 2016 in Gorongosa NP, Mozambique. This yielded one egg-laying queen and at least 5448 workers. This nest was located at the base of a big shrub and a large number of foragers used its many branches to get access to surrounding vegetation. Replete workers have a swollen abdomen full of fat. 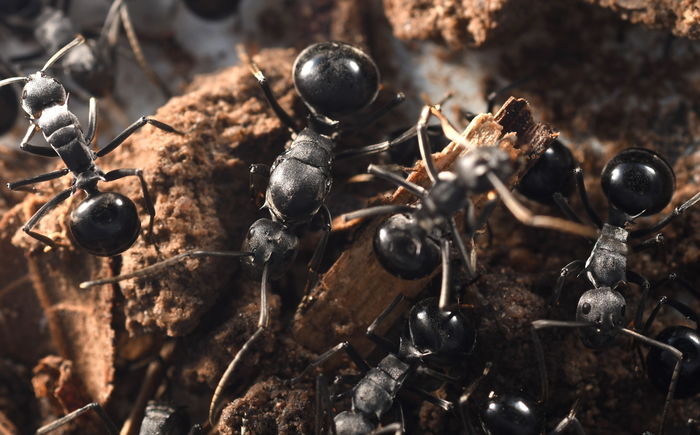 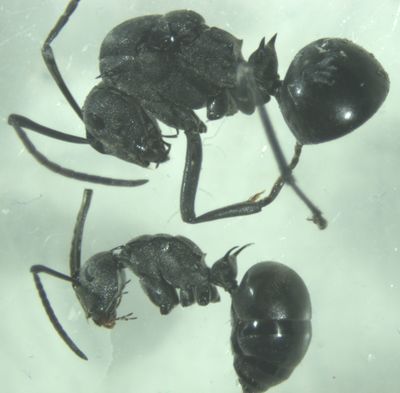 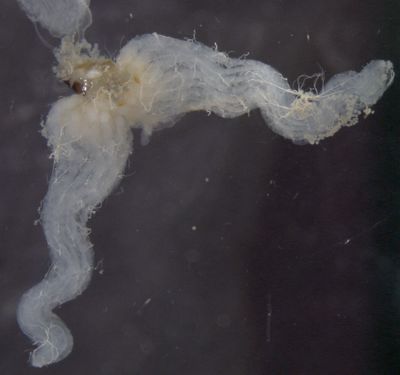 Colonies are monogynous with a single highly fecund queen. Ovaries have 30+30 ovarioles. Photo by Christian Peeters

Mandibles with five teeth; anterior clypeal margin entire, in profile the clypeus is usually convex above and concave below so that the anterior margin projects over the basal borders of the mandibles as a weak shelf. Eyes well developed, flat to weakly convex. Pronotal spines long, acute and usually somewhat incurved; the propodeal armament consisting of a pair of upcurved teeth of variable shape and size, sometimes represented by a pair of blunt, dorsoventrally flattened tubercles. Alitrunk marginate laterally throughout its length, broken at the promesonotal suture and the metanotal groove, and often notched or concave on the sides of the mesonotum. Marginations of alitrunk not produced upwards or outwards as flanges or lamellae; all dorsal surfaces of alitrunk flat to transversely gently convex. Petiole with four spines, of which the dorsal pair are always several times longer than the laterals. The dorsal pair may be long and broadly sinuate, following the contours of the anterior face of the gaster, or shorter and merely recurved. The lateral pair of petiolar spines are short and thick or reduced to a pair of teeth.

Erect hairs present on the head and gaster and present on the dorsum of the pronotum. Hairs always absent from the sides of the head between eye and ventrolateral margin, dorsal surfaces of mesonotum and propodeum; usually also absent from scale of petiole. Pubescence everywhere sparse to absent, greyish or white in colour, never so dense as to render the underlying sculpture invisible.

Sculpturation variable. Clypeus usually with a fine, broken and partially effaced reticulo-rugulation overlying a superficial reticulation. Dorsum of head usually finely reticulate-rugose with a longitudinal direction. In a majority of cases the pronotum has weak, broken, irregular longitudinal rugae, sometimes with occasional weak transverse rugae linking those running longitudinally. Rarely the sculpturation is of fine, dense rugulation with scattered small punctures in the interspaces. Mesonotum and propodeum similar to the pronotum but the sculpturation usually somewhat more coarse. Very rarely the entire dorsum of the alitrunk with a fine dense rugoreticulum. Gaster with an extremely fine superficial reticulation, the edges of component reticulae scarcely or not at all raised, so that the surface is smooth. Colour black, head and alitrunk dull or shining, the gaster always highly polished.

Bolton (1973) - As worker, larger, the lateral marginations of the alitrunk distinct only on the propodeum. Spines of pronotum and scale of petiole reduced. Sculpturation and distribution of erect hairs as in worker, but in one female in the BMNH collection the mesoscutum is as highly polished as the gaster, having the same superficial reticulation.