Species of Ponera form small nests with less than 100 workers in protected places on the ground. The most common nesting sites are in the soil with or without coverings, in cracks or between rocks, in rotten wood, or under bark or moss on rotten logs. They forage cryptically in leaf litter on the ground and are often collected using Berlese funnels.

The mandibles are triangular and with numerous small teeth along their inner margins. The forward sections of the frontal lobes and antennal sockets are very close together and are separated by at most a very narrow rearward extension of the clypeus. The node of the petiole has distinct front, top and rear faces. The underside of the petiole (subpetiolar process) with a translucent thin spot near the front and a sharp angle or pair of small teeth near the rear. The tibiae of the hind legs each have a single large, comb-like (pectinate) spur at their tips (best viewed from the front).

Ponera belongs to a set of very similar genera which includes Cryptopone, Hypoponera and Pachycondyla. Because these genera have the same overall body shape they are often confused. Ponera is unique, however, in having the lower surface of the petiole elaborate, with a thin, circular spot near the front and a sharp angle or small pair of spines towards the rear.

Schmidt and Shattuck (2014) - Workers of Ponera are superficially similar to those of several other ponerine genera, including Hypoponera, Cryptopone, Euponera and Pseudoponera, but Ponera differs from these genera in having an anterior fenestra in the subpetiolar process. A few species of Hypoponera apparently also have a fenestra, but they lack the paired posterior teeth on the subpetiolar process that are typical of Ponera, and Hypoponera has only a single maxillary palp segment while Ponera has two. Some Belonopelta and Emeryopone also have an anterior fenestra in the subpetiolar process, but these genera have narrow mandibles with long attenuated teeth, while Ponera has typical triangular mandibles with only short teeth.

Occurs in the eastern Palearctic and Indo-Australian region from Russia’s Primorsky Krai, Japan, and China to New Guinea. Only five species are known to occur outside that area: three in Europe and two in North America. (Dlussky 2009)

Schmidt and Shattuck (2014) - The species diversity of Ponera is highest in eastern and southeastern Asia and Melanesia, with only a few species reaching Australia and points east. Like the distantly related but convergent genus Hypoponera, Ponera seems better adapted to inhabiting temperate regions of the world than most ponerines, as an endemic cluster of Ponera species occurs in Europe and North America. A few species are readily spread by human activity (Taylor, 1967; Bolton & Fisher, 2011). Two undescribed Ponera species are known from the Malagasy region (Antweb, 2008; but see Bolton & Fisher, 2011), and an undescribed species which may be a Ponera is known from Costa Rica (Longino, 2013).

Taylor (1967) - Ponera are small cryptobiotic ants, nesting in rotting logs in forested areas, or under stones in nonforested situations. In the tropical areas specimens are rarely encountered away from rain forest. In temperate areas, however, species may occur in relatively lightly forested areas. This appears to be the case with Ponera japonica, Ponera pennsylvanica and especially with Ponera coarctata. The Australian Ponera leae is essentially limited to rain forest in the northern parts of its range, but further south it may be found in dry, lightly forested areas. Foraging is probably cryptobiotic, though some New Guinea species have been taken straying on the ground surface.

Little information is available concerning feeding. However, most species are probably insectivorous. I have conducted feeding experiments with some of the New Guinea and Samoan species, including Ponera xenagos, Ponera elegantula, Ponera tenuis, Ponera incerta and Ponera woodwardi. These were unsuccessful with the larger species, except elegantula, which accepted moderately large (8-12 mm) campodeid and japygid Diplura. Tenuis and incerta accepted smaller (4-6 mm) campodeids, isotomid and sminthurid Collembola, and small newly hatched spiders (2 mm long). Negative feeding response was obtained with eggs and larvae of various ants, small crushed insects of various orders, and small myriapods. Stray workers were never observed carrying prey, and distinct middens of insect or other remains were not located near nests.

Schmidt and Shattuck (2014) - Ponera are among the smallest of all ponerines and are thus well adapted to a cryptobiotic lifestyle. Nests are constructed in rotting wood or under rocks, and colonies are small, usually with around 30 workers, but colonies with up to 60 workers have been reported in Ponera pennsylvanica (Wheeler, 1900a) and an average colony size of 60 workers and a maximum observed colony size of 135 workers was reported for Ponera coarctata (Liebig et al., 1985). Like Hypoponera, Ponera larvae have specialized sticky tubercles with which workers attach them to nest surfaces, moving them higher to avoid flooding. Ponera are probably generalist arthropod predators, though few direct observations of their food preferences have been observed. In cafeteria-style feeding experiments, various Ponera species in New Guinea accepted diplurans, collembolans, and spiders, but rejected various other prey. Workers are rarely seen foraging on the ground surface, but are collected from leaf litter, moss, rotting wood, and other confined microhabitats. Workers are sluggish and feign death when disturbed (Wilson, 1957; Pratt et al., 1994). Colony foundation is semi-claustral (Taylor, 1967).

Pratt et al. (1994) studied the division of labor in colonies of P. pennsylvanica. Most colonies exhibited typical age-related polyethism, with younger workers focusing on brood care and older workers on foraging. Most colonies were monogynous, but some had multiple queens (though the reproductive division of labor among them was unknown). Both winged and ergatoid queens occur in this species (ergatoids have also been reported in P. coarctata: Wheeler, 1900a). P. pennsylvanica is unusual among ponerines in that it mates in large swarms of reproductives away from the nest (Haskins, 1970; Peeters, 1991a). Pratt et al. (1994) observed that foraging in this species is generally performed by solitary workers, but groups of workers will sometimes cooperate to retrieve large prey. Tandem running was used during nest emigrations (this has also been reported for Ponera coarctata: N Carlin, pers. comm. in Hölldobler & Wilson, 1990). See Wheeler (1900a), Kannowski (1959), and Mackay & Anderson (1991) for additional details of the habits of P. pennsylvanica. Johnson (1987) reported on the distribution and ecology of Ponera exotica.

Liebig et al. (1995) observed queen size polymorphism in Ponera coarctata, a close relative of P. pennsylvanica, and Liebig et al. (1997) found that workers in orphaned colonies of P. coarctata form dominance hierarchies through aggressive interactions, and that they exchange liquids via trophallaxis as a form of social appeasement (among ponerines, trophallaxis is otherwise only known from some Hypoponera). 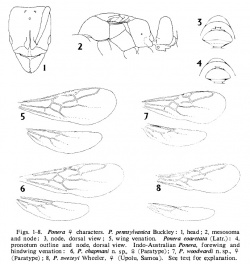 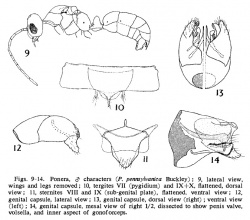 Small to medium size ponerine ants; head width ranging about 0.3-0.85 mm. Head longer than broad, roughly rectangular in frontal view, sometimes prismatic behind. Mandibles triangular, with 3 enlarged apical teeth followed by a series of small to minute, more or less regular denticles; several of these occasionally enlarged. No basal mandibular pit or groove. Palpal formula: Maxillary 2: Labial 2. Clypeus simple, often produced anteriorly, or with a raised tumosity or distinct tooth on the middle of its anterodorsal face. Eyes small, with 1 - 15, usually very indistinct, facets ; situated about 0.75-0.90X the distance from lateral occipital border to midpoint of anterior genal border. Scapes seldom exceeding median occipital border, their apices usually approximately contiguous with it, or failing to reach it by up to twice their maximum thickness. Funiculus incrassate, apical segment subequal in length to the two preceding together; an indistinct to distinct 4- or 5-segmented club often present. Mesosoma elongate, sides more or less parallel, dorsal profile usually flat. Posterolateral edges of propodeum sometimes marginate, forming angles of about 70°-90° when viewed from above. Mesometanotal and lateral mesonotal sutures may be absent. Mesepisternum not divided by a horizontal suture. Middle and posterior tibiae each with a single pectinate apical spur; middle tarsi lacking setose bristles on their outer surfaces. Petiolar node massive; relatively thick in side view, usually tapering only slightly dorsally; seen from above, its anterior face more or less semi-circular, the posterior one transverse, weakly concave to feebly convex. Dorsal and posterior faces of node forming a single arched surface, or with junction between them obtusely marginate. Edge between anterolateral, and posterodorsal faces of node rounded or marginate. Subpetiolar process highly characteristic: usually shallow; with a rounded or bluntly angled anteroventral corner, and a more or less distinctly angular posteroventral one. Latter composed of 2 separate, small to large, right-angled to acute teeth, situated side by side, and sometimes inclined posterolaterally. Anteriorly, subpetiolar process with a more or less distinct circular or oval thin-spot, or fenestra, visible in transmitted light.

Larva: This stage has been described and illustrated in detail for Ponera pennsylvanica by G. C. & J. Wheeler (1952: 631, pl. V, figs 18-21, 28-32). There is apparently nothing unusual in the general body shape or cephalic structure. The body bears about 150 papilliform tubercles, each surmounted by a strong spine. Such structures are present in many larval Ponerini. The exceptional character, apparently allowing generic diagnosis of Ponera larvae, is the presence of 3 or 4 pairs of peculiar mushroom or doorknob shaped glutinous tubercles, on the dorsa of abdominal segments III-V or III-VI. Their number and arrangement is characteristic of Ponera, although similar organs are present in other genera of tribe Ponerini (see discussion below under Hypoponera).

Pupae: Enclosed in cocoons in all known cases except Ponera tenuis, which lacks cocoons in all castes; this exceptional condition is very rare in ponerine ants.