Terayama (1996) - This new species resembles Ponera japonica, Ponera incerta, or Ponera swezeyi by the 5-segmented antennal club and size of body (HW 0.32-0.50 mm in workers), but can be distinguished by the shape of petiole and the absence of mesonotal-propodeal suture on the dorsum of alitrunk. 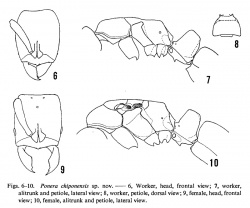 Head. In full-face view, head rectangular and distinctly longer than broad (CI: 77–78), with almost straight posterior margin, slightly convex lateral margins, and broadly rounded posterolateral corners. Eye small; composed of a total of 3–4 indistinct facets. Anterior clypeal margin with blunt medial tooth. Masticatory margin of mandible with a series of about seven indistinct denticles, and three large teeth on the apical part. Antennal scape, when laid backward, with a remaining distance of about 10% of the scape length to the posterolateral corner; average ratio of the length of antennomeres 7/6:8/6:9/6:10/6 = 1.06: 1.88: 2.69: 3.39 (n=6).

Head subrectangular as in Fig. 9, with almost subparallel sides and slightly concave occipital border. Antennal club 5-segmented. Maximum diameter of compound eye 0.10 mm. Mesosoma and petiole as in Fig. 10. Pilosity and coloration as in worker.