Workers have been found in leaf litter in a moss forest and in a dry, semi-deciduous native forest. Other than a few collection habitat notes, little is known about the biology or behavior of this species.

This species is the only member of the genus known to occur in New Caledonia. It can be immediately recognised by the presence of a large, distinctive tooth near each mandibular insertion.

Wilson (1958) - Distinguished in the worker caste from all other known members of the genus by several apparently primitive characters, including exceptionally large size, strongly developed genal teeth, and Amblyopone-like head shape. Two features of head shape are considered to be more typical of Amblyopone than of Prionopelta - the head is broadest near its anterior end, and the lateral borders are relatively straight. Brocha is thus seen to be a species intermediate in position between the remainder of Prionopelta and the presumably more primitive Amblyopone. It has been placed in Prionopelta primarily because of its mandible form, which is typical for that genus.

A few specimens have been found in leaf litter of primary rainforests. 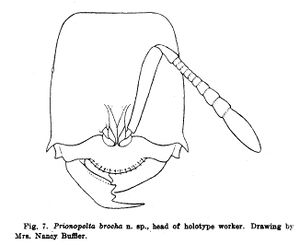 Dorsal surfaces of mandibles finely and longitudinally striolate, and shining. Central portion of clypeus smooth and shining. Remainder of head covered by coarse, contiguous punctures, its surface for the most part completely opaque. Body poterior to the head sparsely punctate, its surface almost entirely feebly shining.

Pilosity very similar to that of most other Prionopelta, including majuscula. Abundant standing hairs present on most body and appendage surfaces, nearly or completely absent from posterior propodeal face, anterior and ventral surfaces of petiolar node, and most of extensor surfaces of legs; everywhere grading into equally abundant, predominantly oblique underlying pubescence.

Anterolateral corners of head, near mandibular insertions, each with a distinct, well developed tooth. Dorsal pronotal sculpturing small foveae which are only slightly more dense than on the mesonotum and propodeum. Foveae on dorsum of propodeum uniformly distributed across its width. Lateral mesosomal sculpturing consisting of small foveae on pronotum and anterior and ventral region of mesopleuron, dorsal region of mesopleuron and majority of propodeum smooth. Fenestra present within subpetiolar process. Colour pale yellow.

NEW CALEDONIA: Mt. Mou, 180 m., December 12, 1954, a single worker (E.O.Wilson). This specimen was collected by means of a Berlese funnel from leaf litter on the floor of dry, semi-deciduous native forest.