Brown (1974) speculated, based on morphology and placement in the Amblyoponinae, that this ant is a predator of some member of the arthropodan forest-floor microgenton. Collections have been made from soil under a clove tree, sifted litter of rotten wood and leaf mold, and soil-and-litter berlesate in forest.

Brown (1974) - Prionopelta concenta differs sharply from other Amblyoponinae, in the form of the mandibles. The 9-merous antennae are also unique, although Fulakora degenerata has only 7 segments in the antennae. The strongly constricted worker trunk, sharply marginate anterior pronotal border, and spurless middle and hind legs are also distinctive characters, not found in this combination in other Amblyoponines. The name refers to the mixture of characters of Amblyopone (now Amblyopone and Stigmatomma) and Typhlomyrmex; the shape of the mandibles and the overall habitus are at first glance like those of the neotropical genus Typhlomyrmex.

Holotype: TL 2.2, HL 0.44, HW 0.40 (CI 91), ML 0.11, scape L 0.27, WL 0.62 mm. Generic characters for Concoctio given on Pilot Register of Zoology Card No. 29. Details of body form, sculpture and pilosity shown on this card in figures overleaf; see also habitus figure on Card No. 29. The apparent bicolorous condition in the figures, with trunk darker than head, petiole and gaster, is due to differences in the electron-optical properties of these parts as coated with carbon and gold-palladium.

Paratypes (2): TL 2.1-2.2, HL 0.42 (both), HW 0.37-0.38 (CI 88-90), ML 0.10 (both), scape L 0.29 (both), WL 0.65-0.67 mm. The 2 para type workers differ from the holotype in their slightly smaller heads and longer scapes and trunks; scapes just reach posterior border of head in full-face view when held straight back. Also, the paratypes have the posterolateral angles of the petiolar node produced downward and backward toward the anterior face of the gaster. These cornuae are only suggested in the holotype. Otherwise, the specimens are similar to the holotype, but the anterior clypeal border could not be clearly seen in the paratypes.

dealate: TL 2.3, HL 0.43, HW 0.38 (CI 89), ML 0.11, scape L 0.31, WL 0.76 mm. Basic differences from worker cited on Card No. 29. Like the para type workers, with which it was originally collected, but head with more nearly straight sides; compound eyes feebly convex, with more or less 50 facets. Ocelli distinct, the triangle astride a dark median pigment blotch. Color and pilosity as in worker. 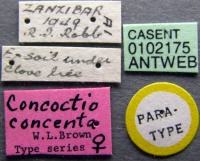 Holotype (Museum of Comparative Zoology) taken from a soil-and-litter berlesate in forest on the Plateau d'Ipassa, Makokou, Gabon, by M. J. A. Barra of the University of Strasbourg during 1966; M. Barra has my thanks for the interesting material sent from this locality. The 2 worker and one queen paratypes (The Natural History Museum) were taken on Zanzibar Island in soil under a clove tree by R. I. (or R. J.) Robb during 1949, and were sent for my study by Mr. Barry Bolton, to whom I am grateful for the opportunity.