Ito (1998) - Colonies of Probolomyrmex dammermani Wheeler were collected in West Java, Indonesia. The nests contained a few millipedes of the family Polyxenidae, all of which were completely divested of their covering setae. Laboratory experiments showed that the ants fed only on polyxenids. The following bionomic characteristics were also noted: colony size was small (14 workers on average; range 8–21) with one dealate queen who was mated and laid eggs; pupae were necked; and both workers and queens had only one ovariole per ovary. All nests were found in the soil at a depth from 3 to 5 cm.

Taylor (1965) - P. dammermani is closely related to the other Indo-Australian species, Probolomyrmex salomonis and Probolomyrmex greavesi. It is distinguished from them by the proportions of the node and the shape of its subpetiolar process. P. salomonis has a proportionately narrow head, and the antennal scapes of greavesi are somewhat shorter.

Eguchi et al. (2006) - In the worker this species is most similar to P. longinodus, but well distinguished from the latter by the relatively shorter petiole (LPtI < 135) and poorly developed propodeal teeth in the worker (see also Terayama & Ogata, 1988). In the male, P. dammermani is similar to Probolomyrmex longiscapus and Probolomyrmex longinodus, but the former can be separated from the latter two by the following characters: 1) thinner head in lateral view, 2) lower frontal carina, 3) narrower eye, and 4) narrower abdominal sternum IX and genitalia.

The nontype workers agree with the syntype worker. However, a certain variation is seen in the following characters: punctation on the body surface; convexity of lateral outlines of head in full-face view; concavity of occipital border (also mentioned by Taylor, 1965); development of posterior portion of subpetiolar process (also mentioned by Taylor, 1965); and development of posterolateral lamella of propodeum (sometimes forming a triangular propodeal spine). The flagellum is more slender in the worker and queen from Bali than in those from the other localities. Workers from colony Eg01iv06-08 are smaller, antennal scape shorter, and petiole in profile shorter (N=2; WL 0.69–0.73 mm, SI 89, LPtI 110) than in the material from the other localities (N=5; WL 0.88–0.96 mm, SI 103–117, LPtI 116–131).

Ito (1998) - One ovariole per ovary was found in both queens and workers (number of dissected individuals: 5 dealate queens, 4 alate queens, 20 workers). Workers had no spermatheca. Both males and females had wings. According to the classification by Ito and Ohkawara (1994), this species belongs to the AQ type in which only dealate queens are mated and lay eggs, while workers are always virgin. Morphology of larvae and pupae was similar to P. bolivensis (Taylor, 1965): larvae had a peculiar median suspensory tubercle on the terminal segment of the abdomen and pupae were naked without cocoons. In the artificial nests, larvae and pupae were attached to the glass ceiling of the brood chamber. As observed in Probolomyrmex boliviensis (Taylor, 1965), larvae were always attached by the tubercle of the abdominal tip, while pupae were attached by the head.

Four of five nests of P. dammermani contained one to six millipedes of the family Polyxenidae. The body length of these polyxenids was ca. two or more times that of the ants. All 11 polyxenids in the nests were completely divested of their covering setae, including caudal tufts as shown by Brandao et al. 1991, (Fig. 5) for the millipede prey of the ponerine ant Thaumatomyrmex. Two individuals in colony FI95-717 were alive although they were without setae. One polyxenid of colony FI95-517 had no setae and some legs had already disappeared. To discover food preference, several soil arthropods were given to laboratory colony FI95-517, including centipedes, termites, earwigs, spiders, isopods, and polyxenids. Only two polyxenids were brought into the nest chamber and were actually eaten by the adult ants and larvae. This result was consistent with the field observation that P. dammermani are specialized predators of Polyxenidae. In addition to the polyxenids, workers, males, and queens also fed on dead pupae and larvae of nestmates.

Hunting and the subsequent behavior were observed six times for three colonies in the laboratory. Foraging was always performed by single workers. When they encountered a polyxenid in the foraging arena, they approached it slowly from the side with the abdomen bent forward underneath the thorax. Then, the worker dashed toward the polyxenid, grasped its body, and stung. The worker then retrieved the paralyzed prey by pulling its antennae or legs or by holding the front part of the ventral appendages of the millipede and carrying the prey underneath its body. In the nest chamber, the prey was immediately stripped of setae by workers. Two or three workers frequently performed this task together. In general, a worker repeatedly grasped and pulled the setae with its mandibles for 1 to 3 minutes. Then, she went to the entrance or the corner of the nest chamber, where she abandoned the setae and frequently groomed her mandibles with the forelegs. Thus, the setae accumulated in the corner of the nest chamber and near the entrance. This behavior was repeated for 30 to 60 minutes, until stripping of the prey was completed. In colony FI95-717, a virgin dealate queen also showed this behavior with one of the two polyxenids. Alate queens, mated queens, and males never removed setae. After the prey were completely stripped, adult ants, together with the alate queens and the dealate queen started to feed; up to eight individuals fed on the prey together. After several minutes, the prey was separated into several small pieces. When the adults finished feeding, the workers gave the remains to the larvae. 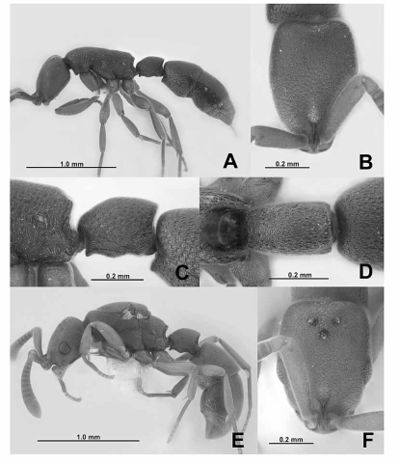 Taylor (1965) - The following notes are based on a single syntype worker (labelled “cotype”) in the Museum of Comparative Zoology (type No. 26427). The general accuracy of Wheeler's original description has been confirmed by study of this specimen, but a few additions and corrections are indicated.

(2) First funicular segment of antenna about one-fifth longer than broad, and terminal segment one-quarter longer than the three preceding segments together.

(3) The two sculptural components normal for the genus present. Fine shagreening everywhere well developed, and overlying puncturation very distinct. Punctures of frons and dorsa of mesosoma, petiole and gaster about 0.01 mm. in diameter and spaced at about the same distance. Postgenal punctures, and those of sides of mesosoma and ventral and lateral aspects of petiole and gaster, larger, averaging about 0.02 mm. in diameter, and variously spaced, from intervals about equal to their maximum diameter to near contiguity.

(4) Mandibular dentition not visible, but apical two maxillary and terminal labial palpomeres with proportions similar to those of P. angusticeps.

Two additional worker specimens in the Museum of Comparative Zoology are apparently referable to P. dammermani and allow extension of its range to the Philippine Island of Negros. One of these is teneral, and was not measured; the other has the following dimensions: HL, 0.60 mm.; HW, 0.40 mm.; CI, 67; WL, 0.88 mm.; PW, 0.31 mm.; dorsal petiole width, 0.17 mm.; petiolar node index, 55; petiole height, 0.26 mm.; petiolar node length, 0.30 mm.; lateral petiolar index, 115. This specimen has lost its antennae, but the other has a scape index of about 100. The mandibular dentition consists of a single large apical tooth followed by a smaller preapical one and five small denticles. The palpal formula is maxillary 4: labial 2 (teneral dissected), with the segmental proportions as in P. angusticeps.

These specimens are very similar to the Javanese syntype in size, general form, sculpturation, pilosity and pubescence. The following slight differences from the syntype are noted: (1) the occipital border is somewhat less concave; (2) the posterior part of the subpetiolar process is more expanded (c.f. figs. 18 and 19); (3) the colour, even that of the less teneral specimen, is a much lighter yellowish-brown; this is almost - certainly due, however, to that specimen being partly callow. 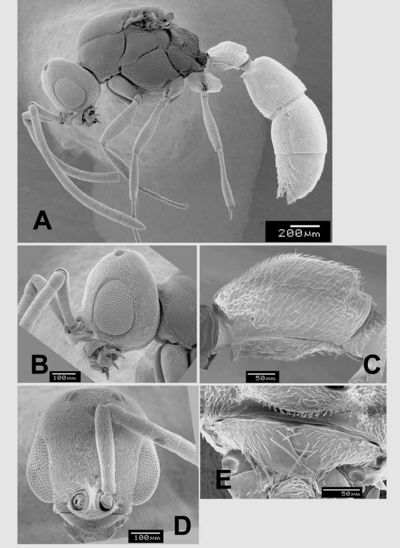