According to Mr. Mizukami (pers. comm.), the colony collected by him was found under a stone on the floor of evergreen forest. (Terayama and Ogata 1998)

Eguchi et al. (2006) - This species is similar to Probolomyrmex maryatiae and Probolomyrmex vieti, but distinguished from the latter two by the posteroventral portion of subpetiolar process forming only an obtuse angle in the worker and queen.

Known only from Okinawa-jima (C. Ryukyus). 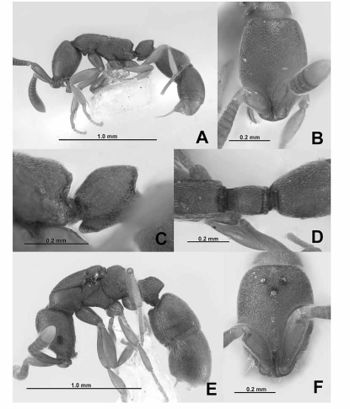 Posterior margin of head straight. Mandibles with one large apical, one subapical and 3 minute teeth. Labio-maxillary complex not dissected. Antennal scapes exceeding beyond the level of eyes, but not reaching anterior ocellus.

Eyes large but not convex, situated anterior to the middle of sides of head; its greatest diameter ca. 0.08 mm in length.. Ocelli distinct but less convex. General form and the remainder of head like those of worker.

Trunk large and robust. Pronotum not overhung by mesoscutum. Mesoscutum and mesoscutellum gently arched above; notauli absent, parapsidal furrows weakly developed on mesoscutum; mesoscutum long, more than twice as long as mesoscutellum; mesepisternum with oblique furrow; epimerallobe absent. Metanotum narrow but distinct, not overhung by mesoscutellum. Propodeum with rounded dorsal face and concave posterior face which bears lateral margination as in worker. Legs, petiole and gaster like those of worker but more massive. Surface sculpture, pilosity and body color as in worker.