Specimens have been collected from leaf litter. Little else is known about the biology of Probolomyrmex watanabei.

Eguchi et al. (2006) - This species is well separated from related species by the following characteristics in the worker and queen: posterodorsal margin of petiolar node in dorsal view produced medially, and abdominal segment III in profile relatively strongly narrowed anteriad in the anterior 2/3. This species is most similar to Probolomyrmex longiscapus (see under P. longiscapus).

Known only from Southern Malay Peninsula. 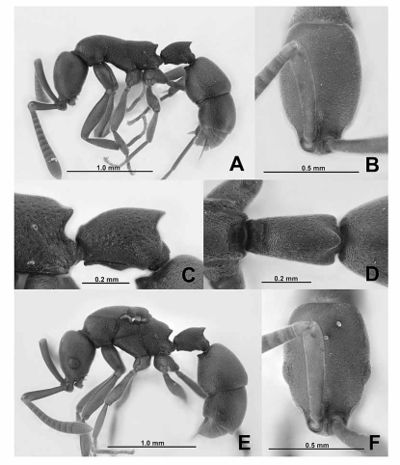 Holotype: Head with somewhat convex genal border and shallowly concave occipital border, posterolateral corner rounded, anteromedian structure well agrees with the generic character. Antennal scape relatively long, slightly failing to reach the median occipital border. Funicular joints, except the basal and the terminal, more or less broader than long; the basal joint about one-fifth longer than broad, and the terminal joint almost as long as the three preceding ones together. Mandible small, elongate-triangular, with an acute apical tooth followed by a series of seven denticles, distal one of which is slightly enlarged. Labrum bilobed, with some (probably six, one of which is lost) clavate setae on the anterior surface, and with spine-like ones on the distal border. Maxillary palpus 4-segmented, the segments I-III nodiform, subequal in breadth, the segment IV (terminal) elongate, bulged medially and almost as long as the segments II & III together. Labial palpus 2-segmented, elongate and rather narrow, the segment I slightly arching and the segment II resembling in the shape to the maxillary segment IV. Relative length (width) of the segments of each maxillary and labial palpus as follow; 6.5 (4), 7 (4), 5.5 (4), 13 (3), and 8 (2.5), 16 (3). Labial and maxillary palpi with neither seta nor sensilla except the two spine-like setulae on the maxillary segment I, just as shown in the fig. Eyeless. Mesosoma, viewed from above, shallowly constricted between the pronotum and the mesonotum; pronotum rounded, much broader than the mesonotum, mesonotum and propodeum with subparallel sides. Mesosomal dorsum in profile shallowly but distinctly concave from the summit of the promesonotal convex dorsum to the propodeal dorsum. Mesosomal sutures absent on the dorsal surface and obsolesc,::mt on the lateral surface. Declivitous face of the propodeum strongly concave, marked off on each, lateral border by a low marginate carina, which is terminating dorsally in a distinct propodeal spine. Petiole slender, higher and broader posteriorly than anteriorly, dorsal profile arching, median posterodorsal border remarkably protruding just as shown in figs; posterior surface strongly concave, marked off on each lateral. border by a low obtuse carina. Subpetiolar process reduced as shown in fig. Gaster comparatively thick; its maximum width in dorsal view about 0.38 mm.

Fine shagreening punctures, about 0.005 mm. in diameter, well developed on everywhere except antennae and legs. Larger overlying punctures distinct, about 0.015-0.030 mm. in diameter, a little smaller and dense on the head, larger and dense on the both dorsal and lateral surfaces of the mesosoma and on the petiole, smaller and rather sparse on the gastric segments I & II, and reduced on other parts. Bristles very few, some stout ones on the mandibles, and a few spine-like ones about the cloacal orifice. Pubescence very minute, extremely dense on everywhere, especially on the antennae. Body entirely brownish to blackish red, opaque to subopaque; antennae, legs and gastric segments III-V somewhat yellowish, also opaque to subopaque.