Most collections are of foraging workers obtained from montane wet forest on low vegetation or in the canopy. No collections are known from below 600 m elevation. Workers are often observed in recent treefalls. Procryptocerus batesi appears to be very similar to Procryptocerus mayri in its habitat preference and nesting habits (see P. mayri for details). Nests contain fewer than 100 workers and may be found in live or dead stems. Colonies appear to be monogynous. Polydomy probably occurs because queenless nests can be found. (Longino and Snelling 2002)

Longino and Snelling (2002) - In the mountains of southern Central America and South America, a complex of species occurs that have (1) the frontal carinae separate from the torulus, passing above it and onto the clypeus; (2) the face sculpture varying from completely striate to strongly clathrate (composed of high, sharp, well-separated rugae, which form irregular polygons over face surface); and (3) the first gastral tergite varying from striate to completely smooth and shining. The complex occurs as a series of allopatric populations restricted to montane forests. There is abundant material from Costa Rica, which reveals the presence of two sympatric species. The populations in Costa Rica and western Panama are peripheral isolates, with the nearest neighbors being populations in the Colombian Andes. Collections occur from Venezuela, through Colombia and Ecuador, south to Peru, but they are too few to draw conclusions about communities of sympatric species or the nature of character variation. Character variation is high even within Costa Rica, and discordant character variation occurs across the material from South America. Each local mountain range may host a unique community, shaped by a combination of dispersal history, local selection, and perhaps hybridization. As a result, a clear taxonomy of these forms may be elusive. 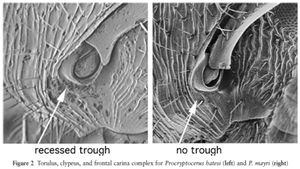 Longino and Snelling (2002) - The following data on nest collections are extracted from field notes, all from Costa Rica.

Longino #2356, Cerro Cacao An entire nest was collected from a dead branch. The nest contained 96 workers, 1 dealate queen, and brood.

Ventral margin of petiole flat, with anterior ventrally projecting right-angled tooth; anterodorsal face of petiole shiny with coarse to faint transverse striae (completely smooth in a few specimens); posterodorsal face areolate-foveate (weakly longitudinally rugose in some specimens); postpetiole with a long, gently sloping anterior face, a broad, rounded summit near the posterior margin, and a steeply sloping posterior face; ventral margin of postpetiole short, with a prominent, acute anterior tooth; dorsum of postpetiole coarsely foveate-rugose (weakly longitudinally rugose in some specimens); first gastral tergite completely smooth or with varying expression of irregular longitudinal striae (in Costa Rica, specimens from the Cordilleras de Guanacaste and Tilaran and the Atlantic slope of the Cordillera Central usually lack striae on the first gastral tergite; some collections from the Cordillera Central and a collection from the Cordillera de Talamanca have striae on the anterior portion; a specimen from the Osa Peninsula has striae on both anterior and posterior portions, with the disc smooth; a specimen from Estacion Carrillo, on the north slope of the Cordillera Central, has the entire surface striatopunctate); microsculpture composed of hexagonal plates, these ranging from distinctly visible to completely effaced; hexagonal plates flat; first gastral sternite largely microreticulate, nearly smooth; second gastral tergite with faint, dense, granular sculpture.

Abundant flexuous setae on face, mesosomal dorsum (.20 on central area of promesonotum, not including those on lateral margins), petiole and postpetiole, and gaster; color shining black, with appendages gradually fading to dark brown distally.

Pronotum, axillae, scutellum, and dorsal face of propodeum coarsely areolate as on frons, mesoscutum tending more to discrete foveae. Posterior face of propodeum smooth and shiny except for 1–2 transverse carinae between spine bases. Sides of pronotum grading into coarse longitudinal striae. Similar striae covering dorsal half of katepisternum, extending about halfway across the propodeum; rest of sides of mesosoma, including anepisternum, coarsely areolate. Forecoxae transversely striate, meso- and metacoxae unsculptured. Propodeal spines triangular, just under half the length of the dorsal face of the propodeum. Femora strongly swollen medially, spindle-shaped. Exterior surfaces of tibiae longitudinally rugose-areolate, rest of legs smooth and shining.