Most species lack winged queens and instead have mated workers that produce female brood (i.e. gamergates). In Rhytidoponera confusa, dealate queens found new colonies and are replaced by gamergates when they die. Only in Rhytidoponera purpurea are gamergates unknown.

These are some of the most common ants in Australia. They are found across the continent and can be very abundant, especially in urban areas such as yards, gardens and parks. Some species, especially those found in forested areas, generally forage during the day while many of the arid zone species forage primarily in the evening and at night. In forested areas they will forage on low vegetation and trees as well as on the ground. They are general predators or scavengers, with some also taking honeydew and others showing a strong preference for seeds. Workers generally forage singly or less often in small groups. Some of the smaller species have a potent sting while others, including the larger species, have a weak sting or are unable to sting.

Nests are generally in soil either in the open or under rocks or other objects on the ground. When in the open, nests range from low and messy mounds to large mounds decorated with stones and small twigs or leaves. Species found in wet sclerophyll and rainforest often nest in rotten wood. Some rainforest species will occasionally nest arboreally (although they nest on the ground as well).

The forward sections of the frontal lobes and the antennal sockets are separated by the broadly rounded or triangular rearward extension of the clypeus. The leading edge of the pronotum on each side just above the front legs with a small angular tooth or spine. The node of the petiole has distinct front, top and rear faces. The tips of the tibiae of the hind legs each have either a single small, simple or comb-like (pectinate) spur, or two spurs, one large and comb-like (pectinate) and one small and simple (best viewed from the front). The claws on the hind legs have a tooth at about the middle of their inner surface.

In Rhytidoponera sp. 12, twenty-one mated workers were found in a large colony (at least 600 workers). There were few large yolky oocytes, and the dense accumulations of yellow bodies indicated that eggs were laid regularly by these gamergates. In contrast, a substantial proportion of workers confined underground had many large yolky oocytes in their ovaries. Examination of various details of oogenesis (size and appearance of basal oocytes,...) revealed that oocytes do not mature in unmated workers (Peeters 1987). Thus virgin workers store food by accumulating non-viable large oocytes in their ovaries.

Most species lack winged queens but have mated egg-laying workers called gamergates, and colonies reproduce exclusively by fission (Haskins and Whelden 1965). Yet winged queens still occur in the basal R. impressa group (unpublished phylogeny by H. Reichel), thus allowing the option of independent colony foundation (ICF). In R. impressa group, both modeling and empirical approaches showed that the proportion of queenright colonies in the coastal populations in the East decreases from north (tropical) to south (temperate), indicating that environmental changes make colony fission more successful than nonclaustral ICF by winged queens (Molet et al. 2008). This is confirmed empirically by the decrease in size of queenright colonies but not gamergate colonies. Empirical data also showed that gynes are produced in smaller quantity, but they are heavier relative to workers in both lean weight and fat weight. 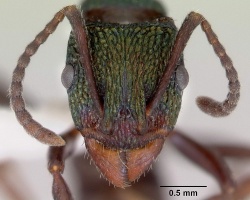 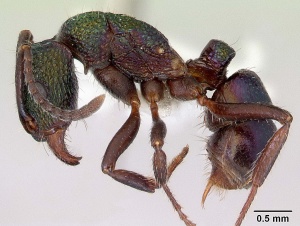 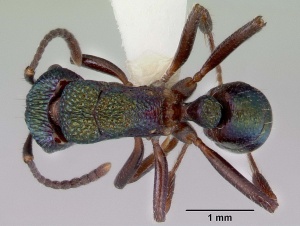 Worker of R. metallica from Queensland. 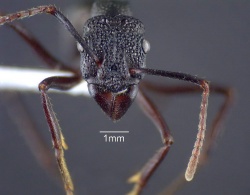 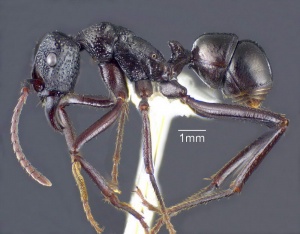 Worker of R. nodifera from Queensland. 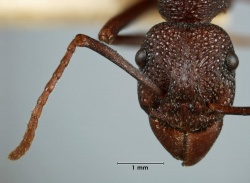 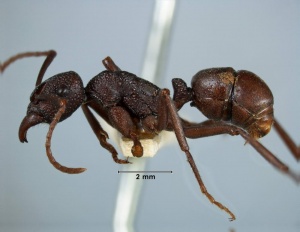 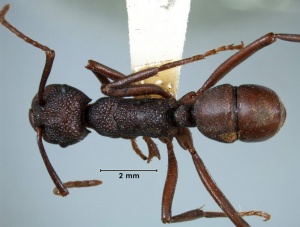