A widespread and common species of wet forests but as currently defined this name is likely to represent a species complex.

Some Rogeria alzatei specimens strongly resemble specimens of Rogeria belti from Costa Rica in size, habitus, spine length, and sculpture, but alzatei: 1) is smaller (WL 0.52-0.65mm), 2) has a truncate clypeal apron in Central America, 3) has smaller eyes (11-14 facets), and 4) lacks erect hair on the scapes.

The geographic ranges of Rogeria creightoni and belti overlap in much of Central America and some members look quite similar in size, sculpture, and pilosity. Workers of creightoni can be distinguished by: 1) generally smaller, elliptical eyes with longer propodeal spines (<19 facets; EL/SpL 0.29-0.64 vs. 0:62-1.23 in belti), 2) more horizontal propodeal spines, 3) promesonotal dorsum rugose to rugose-areolate, and 4) hair on mesosoma dorsum clearly sorting into two distinct kinds.

This species is quite variable and Longino (Ants of Costa Rico, 1998) states this name represents a species complex. Two other distinctive forms have been noted.

Southern Mexico to Colombia and Venezuela. Elevations range from 200m to 1500m in Mexico and 50m to 950m in Panama.

Labels with ecological data show collections from rain forest "in Philodendron," "frond sheaths on ground," leaf litter, around an epiphyte mat on a fallen branch, rotten wood, and in dead trees or branches on the ground. Jack Longino found a colony "nesting under loose bark of a still solid log fallen across trail." On another rotten log he lured workers from under the bark to a freshly killed tabanid (Longino, unpublished field notes).

Also, within Costa Rica, Longino (Ants of Costa Rico, 1998) has found: collected from both the ground (foragers, Winkler samples) and from the canopy (under epiphytes on branchfalls). Longino collected a nest from under loose bark of a still solid log fallen across a trail, and in another collection observed workers recruiting to a freshly killed tabanid from under the bark of a rotten log.

Kugler (1994) - Specimens from Miami, Costa Rica differ from typical belti in having: 1) an evenly convex clypeus, 2) a larger eye (31-36 facets vs. 20-30 in typical belti), 3) smaller propodeal spines (PSI 0.15-0.18 vs. 0.19-0.24 in typical belti), 4) generally narrower head, 5) head and mesosoma more rugose than areolate, and 6) weaker macrosculpture in general, but microsculpture stronger on head and petiolar node. Queens from Miami, Costa Rica like their workers have narrower heads, shorter ropodeal spines and weaker sculpture than the four from Guatemala, Panama and the Osa Peninsula of Costa Rica. I considered these Miami ants a new species until the arrival of new specimens from Costa Rica and Colombia. One worker from Heredia, Costa Rica has a convex clypeus like the Miami ants, but eye and propodeal spine size just within the typical belti range. Other workers from Colombia have eyes as large as any of the Miami specimens, but an emarginate clypeus like typical belti, and they have intermediate sculpture. While it is still possible that the Miami population represents a different species, I am not confident of that at present.

Mandibles with 5-6 teeth; typically 5 teeth evenly decreasing in size basad followed by a large basal tooth, or 4 teeth are followed by 1 or 2 denticles and a large basal tooth. A few specimens in scattered localities have an additional denticle between the third and fourth teeth. Palpal formula 3,2. Clypeal apron medially emarginated in most, but evenly convex in specimens from Miami, Costa Rica. Body of clypeus not projecting over clypeal apron. Posterior outline of head weakly convex, sometimes with a slight median concavity. Eyes sometimes narrower than shown in Fig. 35; widest in Miami, Costa Rica 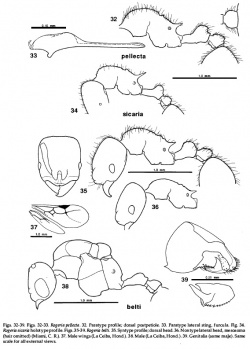 specimens. Pronotum from the side usually subangular at junction of anterior and dorsal faces; from above, shoulders well rounded. Metanotal groove either hardly visible, or a distinct narrow groove, or a small step in mesosoma profile; usually marked behind by a transverse ridge. Propodeal spiracles small, slightly more than 1 diameter from posterior edge of propodeum, facing slightly caudad. Metapleural lobes narrowly to broadly rounded. Petiolar keel not lamellate. Petiolar node usually dome-shaped, but sometimes slightly flattened on top. Postpetiolar node highest in posterior half; dorsal view subtrapezoidal as in Fig. 49; sternum long and flat. Sting apparatus as in creightoni-group diagnosis.

Longitudinal rugae on frontal lobes become rugose-areolate by midlength of head; middle pair of rugae usually remain free of cross-ridges until posterior head. Cheeks and laterodorsa areolate to rugose-areolate. Sides of head strongly areolate in most, but nearly smooth in Miami, Costa Rica specimens. Posterior head areolate with no clear transverse pattern in most, but transversely arching rugose to rugose-areolate in ants from Miami, Costa Rica and Colombia. Promesonotum generally coarsely areolate to areolate-rugose, but lower in relief and more rugose in specimens from Miami, Costa Rica and some from Colombia. Meso- and metapleura confused areolate to rugose. Dorsal face of propodeum predominantly transversely rugose, except for Boquete, Panama specimens, in which dorsal face is indistinctly areolate. Petiolarnode not as heavily sculptured as mesosoma, but distinctly areolate to weakly rugose-areolate; dorsal and anterior faces often free of macrosculpture. Intervals irregular and usually shiny. Microsculpture generally weak and indistinct, producing quite shiny intervals in macrosculpture, especially on sides of head, mesosoma, and on petiolar node. Head dorsum and petiolar node of Miami, Costa Rica specimens with more pronounced microsculpture, lending a granular appearance.

Like the worker except for normal queen structures and the presence of predominantly rugose sculpture on the mesonotum. Parapsidal furrows indistinguishable from furrows in sculpture. Habitus similar to that of merenbergiana queen, but mesonotum slightly more convex and propodeal spines longer and narrower. Wings as in male.