Rogeria curvipubens has been collected in by Berlese sampling in tropical rain forest, secondary growth forest, and dry tropical forest. Collection sites have all been below 500m elevation (Kugler 1994).

Workers come from the Caribbean Islands and northern South America. However, if the two queens from Mexico and Guatemala are in fact curvipubens, the range of curvipubens broadly overlaps that of sister species Rogeria cuneola.

Kugler (1994) - Rogeria alzatei and Rogeria leptonana are very similar to curvipubens and Rogeria cuneola and have been considered curvipubens in the past, but I believe they can be distinguished, usually by general habitus, but especially by more abundant erect pilosity than described in the curvipubens-group diagnosis. Moreover, side-by-side comparisons of sympatric specimens from the Villavicencio vicinity of Colombia and from Barro Colorado Island reveal more differences: the alzatei specimens have a truncate clypeal apron, narrower propodeal spines, and generally stronger sculpture. The leptonana specimens have an emarginate clypeal apron, lower mesosoma, and larger petiolar keel. The only question of identity arises on the north coast of Colombia, where a single specimen has wider propodeal spines and convex clypeus like curvipubens, which are common in the area, but has the abundant pilosity and stronger macrosculpture of alzatei. I call that specimen alzatei, since spine and clypeal shapes vary in that species.

Assigning stray queens has also been problematic. In two localities on the north coast of Colombia (Pueblito, Tayrona Park; Don Diego, Guajira) I collected three distinct kinds of queens. One set has a distinctly lower mesosoma (MHI 0.92-0.97) and larger petiolar keel than the other two and has abundant erect pilosity on scapes, whole head, mesosoma, waist, and gaster. These and other characters suggest those are leptonana queens. The other two kinds of queens have a more compact mesosoma (MHI 1 .05-1.22), but one set has no erect hair on scapes, head, waist, or first tergum of gaster, little or no erect hair on the mesosoma dorsum, more effaced sculpture with nearly smooth sides of head and transversely arching rugae on posterior head, and spatulate lancets, just like the curvipubens workers that are common in both areas. The third set of queens have distinct macrosculpture, distinctly areolate sides and posterior head, short erect hair on the whole head dorsum and more abundant erect/ suberect hair on mesosoma, waist and gaster and acute lancets. I have tentatively assigned them to innotabilis because of their evenly convex clypeus and posteroventral spine on the spiracular plate of the sting apparatus. 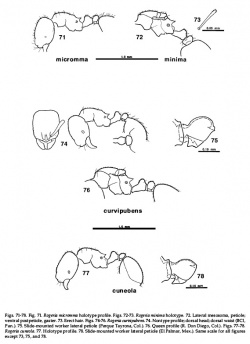 Mandibles typically with 6 teeth, but occasionally with an additional denticle or tooth; basal tooth little if any larger than penultimate basal. Haitian specimens with 5 teeth. Anterior edge of clypeus evenly convex or with median concavity (Haiti). Body of clypeus, though not especially prominent, is generally the anteriormost point of the head in full dorsal view; little or no shelf-like apron. Posterior outline of head generally broadly convex, but sometimes with a weak median concavity. Nuchal groove weak. Eye small, elliptical. Pronotum weakly angular or rounded in front and on sides. Metanotal groove absent or suggested by a broad, very shallow impression. Anterior propodeum marked by transverse carinula that often does not interrupt mesosoma profile. Propodeal spines short, wide, with curved or straight edges; a bisecting line passes below the anteroventral corner of pronotum. Metapleural lobes low, subangular to rounded. Sting apparatus like that of inermis in most respects, but lancets and sting shaft are weak and the lancets are blunt and spatulate. Though twisted in all preparations, the sting shaft does seem to have a dorsoterminal flange.

Head with 0-6 short suberect hairs; mesosoma dorsum with 2-7 pairs. Extent of erect pilosity on gaster T1 variable; usually covering whole surface, but may cover as little as the posterior third.

Queens vary like workers in shapes of head, propodeal spines, petiole and postpetiole. Mandibles have 6 teeth in most; plus 2 denticles in the Guatemalan specimen. Parapsidal furrows weak or indistinguishable. Wing venation as in belti. Sting apparatus of a queen from the north coast of Colombia like that of workers from the region, including spatulate lancets. Sculpture, pilosity, and color also vary similarly. Sides of head may be partly rugose, but some portion smooth. Pro-, meso-, and metanota rugose. Meso- and metapleura longitudinally rugose dorsad; anterior half of mesokatepisterna very smooth and shiny. Microsculpture as in workers. Numbers of erect hairs on various parts range as in workers, except for one queen with 10 pairs on mesosoma dorsum.

Queens from Mexico and Guatemala are not associated with workers. Moreover, the Guatemalan specimen lacks a postpetiole and gaster. Both have the side of the head rather strongly rugose-areolate, but I am guessing that they are curvipubens, rather than cuneola on the basis of the strongly shiny mesokatepisterna and shape of the postpetiolar sternum of the Mexican specimen.