Type specimens come from lowland rain forest, Colombian specimens from forest receiving about 2m strongly seasonal annual precipitation. Montane specimens from Costa Rica were taken under large rocks in a pasture; those from Panama were collected in debris under a stump in unknown habitat (Kugler 1994). The species is known from rainforest to strongly seasonal dry forest, in forest litter.

Chiapas, Mexico to the northern coast of Colombia and also the Dominican Republic; from sea level to 1750m (Kugler 1994).

The nontype specimens from the high elevations of Costa Rica may belong to a distinct species defined by the complete absence of propodeal spines, but presently they seem linked to the types by the two specimens from Panama, which have intermediate spine length.

The different palpal formula of the workers and queens and the fact that workers and queens specimens come from different countries cause doubt about whether the queens are correctly assigned. But most morphological characters fit leptonana better than any other species. See also Rogeria curvipubens. 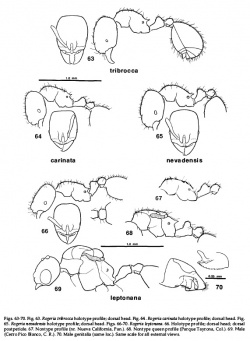 Mesosoma dorsum with more than 12 pairs of emergent erect hairs; nodes each with at least 2 pairs of long posterodorsally projecting hairs. Tibiae with erect hairs.

Type description extended as follows. Mandibles subtriangular in Dominican Republic specimens. Clypeal apron convex in the Chiriquí, Panama specimens and truncate in Chiapas and Dominican Republic. Body of clypeus not projecting beyond clypeal apron in Chiapas specimen. Basal tooth may equal penultimate basal in size. Scapes slightly longer (SI 0.77-0.83). The Ocosingo, Mexico specimen has slightly longer spines than types (PSI 0.18); Cerro Pico Blanco, Costa Rica specimens have very short spines (PSI 0.07-0.10) those from Panama are devoid of armature. Short propodeal spines of Costa Rican specimens are more inclined than in types; a bisecting line passes just below the axilla. Postpetiole of Chiapas and Pedernales, Dominican Republic specimens narrower than others (PpetW/PpetL1.23-1.28 vs. 1.41-1.56); Pedernales postpetioles are widest in posterior half. Microsculpture on head may be less distinct than in types. Panamanian specimens lack erect hair on extensor surfaces of tibiae and have only 9 pairs of erect hairs on the mesosoma dorsum.

Both queens collected on the north coast of Colombia. Though workers of leptonana are unknown from South America, these queens have strongest affinities to leptonana workers: Mandible with 5 teeth; basal as large as or larger than penultimate basal. Clypeal apron emarginate. Posterior outline of head flat. Propodeal spines wide. Propodeal spiracle 2 diameters from edge of infradental lamella. Mesosoma low. Petiolar peduncle with prominent lamellate keel; node short. Pygidium and sting apparatus as in workers.

Sculpture also as in workers. Microsculpture present but indistinct on head and mesosoma. Pronotum with 1-2 transverse rugae medially; laterally rugose. Meso- and metanota longitudinally rugose, with nearly smooth, shiny intervals. Meso- and metapleura longitudinally rugose, except for smooth, shiny mesokatepisterna. Dorsal face of propodeum smooth. Petiole, including peduncle, and postpetiole nearly smooth. There are differences, however. Palpal formula 2,2 in the dissected Guajiran queen (vs. 3,2 in workers). One queen has a nearly subrectangular postpetiole. Neither has erect hair on the tibiae.

The name from leptos (G., slender) and nanus (L., dwarf) describes the habitus of this species.