Rogeria stigmatica is known only from the Central and West Pacific, from as far east as Tahiti to the western tip of the Island of New Guinea and from about 22°S to 7°N (Kugler 1994).

Santschi (1922) claimed that Rogeria manni differed from stigmatica in a variety of ways. After examining manni types, I could confirm only one clear way they differ from the types of stigmatica and sublevinodis: the presence of rugose sculpture instead of areolate sculpture on the promesonotum. However, in non-type material, I found all intermediate states, sometimes within the same locality. Other supposedly different characters also intergrade or are due to the manni types being at the small end of the size distribution.

I have too few collections from Papua New Guinea to know if those specimens with unusually small eyes and few erect hairs on gaster T1 might be a distinct species. 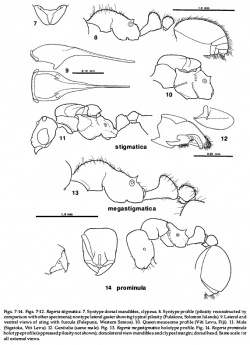 Mandibles subtriangular (usually) to triangular; with 5 subequal teeth or 3 apical teeth followed by 3-4 (rarely 5) smaller teeth or denticles. Palpal formula 3,3. Little or no clypeal apron; median clypeal margin truncate, weakly convex, or weakly angular. Body of clypeus not projecting over clypeal margin. Eyes oval, large (EL 0.10-0.15mm and 17- 34 facets), except in some of the Papua New Guinea workers (EL 0.05-0.07mm; 7-9 indistinct facets). Nuchal groove distinct from behind, but not clear in side view. Promesonotum with evenly convex profile. Metanotal suture narrow, emphasized by a sharp ridge at anterior edge of propodeum. Node large, wider than long, more or less symmetrical in side view (Fig. 8). Postpetiolar node in side view rounded front to back; usually widest in anterior half, much as in Fig. 66, but sometimes widest midlength. Postpetiolar sternum short. Sting apparatus like that of ciliosa (Fig. 3), except for: 1) spiniform medial and and lateral projections from anterodorsal corner of quadrate plates, 2) smaller valve chamber, and 3) lack of anterolateral processes on sting base (Fig. 9). Gonostylus sometimes with no clear sensillar gap; sometimes lacking a companion seta. The "Rogeria (stigmatica group) spp. 1 and 2" in Kugler (1978b) are both stigmatica. The sting shown here is more accurate than the previous one, which was not in full lateral orientation when drawn.

Decumbent to subdecumbent pilosity covers most of body. Sparser erect to suberect hair also on dorsa of scapes, head, mesosoma, nodes, and gaster. Erect hair moderately abundant on gaster T1 of most specimens (Fig. 8), but sparse on specimens from Papua New Guinea. Body of clypeus with strong median seta.

As in worker except for the usual caste differences. Mesosoma habitus as in Fig. 10. Queen from McAdam Park, Papua New Guinea with median bulge on pronotum. Pronotum areolate on sides; finer and transversely rugose-areolate mesad. Mesoscutum longitudinally rugose; mesoscutellum areolate-rugose. Metanotum smooth. Mesosoma sides confused areolate, except for smooth area on mesokatepisterna and costulate metapleural gland bullae. Wing venation as in lirata (Fig. 30), except for Rs vein as in belti (Fig. 37).

Mandibles with a large apical tooth and 4 others decreasing in size basad. Posterior lobe of clypeus projects more broadly between antennae than in worker; anterior clypeal margin weakly convex. Frontal lobes absent. No distinctly impressed frontal area. Funicular segment 6 curved and longer than 4 and 7; more extremely curved and elongate on one side of the head than the other. Posterior outline of head medially concave; sharp crests run from ocelli to posteroventral corners of head, which project slightly and fit around prothoracic sternum when head is retracted. Mesosoma and waist as shown in Fig. 11. Genitalia as shown in Fig. 12. Head integument vaguely roughened. Mesosoma and waist smooth, except along furrows and on sides of propodeum, metepimera, and petiolar peduncle. Gaster smooth and shining. Pilosity all erect to suberect, except around eyes. Propodeum nude. Color variation as in worker.