The type series was collected from the stomach of an anteater (Tamandua tetradactyla).

Only known from workers. 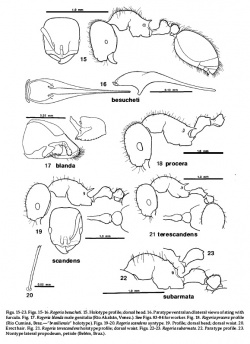 Additions to Kempf's (1962a) description. Mandibles usually with 5 teeth that decrease in size basad. Sometimes basal tooth replaced by two very small teeth, or 1-2 denticles are found between the basal and penultimate tooth. Clypeal apron weakly notched medially to evenly convex. Frontal lobes narrow as in scandens. Nuchal grooves shallow, forming only a weak notch in lateral view. Figs. 22-23 show the range of propodeal spine size and angle, but tips sometimes more rounded. Petiole clavate to rather distinctly set off from peduncles. Postpetiole from above much as in Fig. 21. Posterior surface of pygidium with a caudal pair of long, columnar, piligerous tubercles that are visible at 50X with a dissection microscope. Sting apparatus nearly identical to that of inermis; sting as in pellecta.

Scapes and extensor surfaces of legs lack erect hair. Rest of body with both short, appressed-decumbent and longer, erect-suberect hairs. Erect hairs are nearly as stiff as those of scandens and terescandens, but seem to have acute tips.

Color dark brown to yellowish-brown with a reddish tint on mesosoma, waist and middle of gaster; appendages and ends of gaster lighter.