The only species of this genus, Rostromyrmex pasohensis is a small, cryptobiotic inhabitant of rainforest leaf litter in peninsular Malaysia and Singapore. Workers are easily overlooked because of their small size, slow movements and dark colouration. Colonies are small, apparently monogynous (single-queened) and found in rotten wood on the ground.

Rosciszewski (1994) - The assignment of Rostromyrmex to any of the established tribes or genus groups is difficult. The characters of the clypeus, sting and wing venation rule out a placement in the Myrmica- or Tetramoriurn genus groups. The strongly carinate clypeus and the open radial cell plead against a placement in the Pheidologeton genus group (Ettershank 1966, Bolton 1987). According to Bolton (pers. comm.), Rostrornyrmex is very close to Lordomyrma, with which it shares a number of characters: frontal lobes, antennal scrobes, strong sculpturing of the body, conspicuous first gastral tergite, and absence of tibial spurs on middle and hind legs (Wheeler 1919). Also the shape of the clypeus can be derived from the Lordomyrma pattern. However. the fore wing venation in the male differs considerably from that illustrated by Wheeler (1919: 105) for Lordomyrma (still, its variability has never been assessed - Bolton, pers. comm.). Other important differences, which however may be interpreted as further transformation of the Lordomyrma characters (Ward, pers. comm.), are (in the females) the reduction of frontal carinae, 6- or 7 -dentate mandibles, 9-segmented antennae, and a long petiolar peduncle. The antennal scrobes in Lordomyrma are bordered with frontal carinae and are differently sculptured from the remainder of the head - which is not the case in Rostromyrmex. The sting in Rostromyrmex differs from that of Lordomyrma (Kugler 1978): not cuneiform, shaft long, sting base not vertical in profile. The strong basal ridge and well developed furcula with a long dorsal arm, as found in Rostromyrmex, are absent in the Lordomyrma (= Promeranoplus) genus group accodling to Kugler. The sting and furcula resemble those of some species of the Solenopsis genus group (Kugler 1978), but other characters of the sting apparatus are different: spiracular plate with dorsal notch, and oblong plate without noticeable posterior incision. The fore wing venation: cross-vein r-m absent, and radial cell open, except for the reduced stigma, is similar in the Solenopsis genus group and Megalomyrmex (Ettershank 1966, Bolton 1987). A strong median seta on anterior clypeal margin is characteristic of the Solenopsis genus group (also present in some Rogeria - Bolton, pers. comm.). A similar but weaker seta is also present in females of Rostromyrmex but, considering the peculiar development of clypeus, it is probably not homologous. Further differences from the Solenopsis genus group (see Bolton 1987) include mandibles with more than 5 teeth, antennal scrobes, well developed propodeal spines, strong sculpture on promesonotum, and lO-segmented antennae in the males.

The little natural history information that is known about these ants is provided on the Rostromyrmex pasohensis page.

The assessment of character state polarities is based on comparisons with the Myrmica and Tetramorium genus groups which are considered in most respects to exhibit the ancestral myrmicine condition (Bolton 1987). The following characters from the generic diagnosis of workers are considered as plesiomorphic: 1, 13, 18, 26, the following as apomorphic: 2, 3, 4 24, and the characters 7-11 as apomorphic by development. The following characters are plesiomorphic in the Myrmicinae (Bolton 1988): median portion of clypeus broadly inserted between widely separated frontal lobes, and frontal triangle sharply demarcated. The striking clypeal prominence (rostrum) is developed from the bicrinate Lordomyrma pattern by extreme narrowing of the median portion of the clypeus, fusion of its carinae, and projection of the resulting lamella (Bolton, pers. comm.). Thus the median clypeal carina, which is a plesiomorphic state, is regarded as apomorphic in Rostromyrmex. The posterodorsal position of the propodeal spiracle (character 19) is considered as apomorhic. The plesiomorphic location of this spiracle is considered to be anterodrosal (Lattke 1990). In the male the absence of cross-vein r-m and the open radial cell in the fore wing are apomorphic states. The missing stigma and very long 2r (aligned with Rsf4?) are regarded as autapomorphic states.

Monomorphic ants belonging to the subfamily Myrmicinae with the following combination of characters.

1. Mandibles broad triangular, 6- to 7-dentate (6-dentate in paratypes, 7-dentate in holotype, basal tooth very small; in all cases only one mandible clearly visible). Dentition decreasing in size from other teeth by short diastema.

6. Lateral portions of clypeus not raised posteriorly into a shield wall in front antennal insertions.

11. Typical frontal triangle absent. Instead, the strip of cuticle between the frontal lobes widens posteriorly into an elongate, narrow, somewhat rhomboidal area which is depressed and shining.

12. Antennal scrobes present, large but shallow, deepest in the lower part near antennal sockets, and not sharply defined.

14. A carina on ventrolateral margins of head present, extending from occipital margin approximately to eye level.

15. Alitrunk compact, slightly convex throughout in lateral view, propodeum separated from promesonotum by small but distinct metanotal groove which is bordered by a raised ridge posteriorly.

19. Propodeal spiracles conspicuous, situated above midheight and behind midlength of the propodeum, close to the margin of the declivity, some distance in from bases of propodeal spines.

25. First tergite forms more than half length of gastral dorsum.

26. Sting not heavily sclerotized, but probably able to sting, without any lobular flange near apex.

General characters as in workers, with following differences

5. Alitrunk slightly convex as in workers, but propodeum on lower level, separated from remaining alitrunk by a deep step.

8. Propodeal spiracles situated on the declivity itself, very close to metapleural glad bullae.

10. Several gland-like structures on katepisternum present (visible in SEM). According to Billen (pers. comm.), they might represent glands of an unknown type. However, for a morphological study living material is necessary. 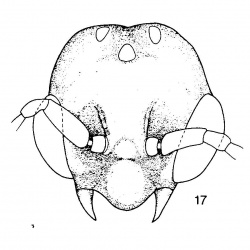 3. Mandibles small, triangular, without any teeth, narrowed to a blunt tip.

6. Anterior clypeal margin broadly rounded, with row of 7 setae which are shorter than in females.

7. Antennal scrobes present, but shorter than in females.

14. Propodeal spiracles situated high up, close to junction of metapleuron.