One of the better known species of Simopone as it has been collected in a number of locations, forest habitats and situations. Workers have been found foraging on the ground, on low vegetation and in dead woody structures above the ground.

Bolton and Fisher (2012) - This is the first species ever described in Simopone and one of only two species of the grandidieri species group known from Madagascar. Differentiation from the second species, Simopone elegans, is noted there. These two species are separated from the remainder of the regional fauna by the characters given in the group diagnoses and the key to species groups. The workers of grandidieri appear to show size-related variation, perhaps the most obvious example of which is the narrowing of the head as head size decreases. The smallest workers (HW 0.53–0.61) have relatively longer, narrower heads (CI 60–65) than the largest workers (HW 0.78 or more, CI 69–75).

Little is known about the biology of most species of Simopone. Specimens are rarely collected, and the number of species known only from workers is telling in regards to a lack of nest samples. Species are almost entirely arboreal but on occasion foraging workers are found on the ground or in rotten logs. Prey records are extremely sparse. They consist only of Crematogaster brood by Simopone vepres, and the brood of Terataner by Simopone sicaria. Nevertheless, these two records support the general supposition by Brown (1975) that most or all members of tribe Cerapachyini prey on other ants, or more probably the brood of other ants, but actual records are extremely rare. (Bolton and Fisher 2012)

Palp formula 5,3. Clypeus broadly downcurved anteriorly, more or less vertical above clypeo-labral junction, the latter not strongly reflexed. Frontal carinae widely separated, FcW/HW 0.45–0.54. Eyes located at or just in front of the cephalic midlength, EP 1.00 or less. Antennal fossa broad and in profile extends almost to the anterior margin of the eye but does not form a narrow longitudinal scrobe. Leading edge of scape without projecting setae. In full-face view sides of head without setae. Cephalic dorsum with only a single pair of standing setae, located close to level of posterior margin of eye. Cephalic dorsum with scattered punctures upon a surface that is usually merely pruinose, at most extremely feebly shagreenate but without organised microreticulate ground sculpture. Mesopleuron with a conspicuous transverse sulcus. Pronotum with a single pair of setae, near the humeri; mesonotum and propodeum usually without setae but the former may have a single small pair. In dorsal view the pronotum with a weak transverse carina anteriorly and the propodeum with a poorly defined, low, blunt carina between dorsum and declivity; promesonotal suture feebly present, may be almost effaced, metanotal groove vestigial to absent. Mesotibiae and metatibiae without setae. AII (petiole) with a distinct, strong anterior transverse carina but posteriorly the dorsum rounds evenly down to the foramen, without trace of a 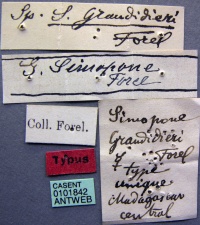 carina; in dorsal view the sides of AII diverge posteriorly. Lateral surface of AII tergite with a carina that curves down from the anterior margin and terminates just behind the level of the spiracle. Posterior corners of AII are rounded and do not extend into laterally or posteriorly directed teeth. AII and AIII longer than broad in dorsal view, but AIII only slightly so; AIV broader than long. Sides of AIII in dorsal view usually parallel, but often slightly convex in larger workers. Abdominal tergites from AII to AV often without setae, but each may have a maximum of two pairs. Sternites of AIII to AV with setae present, small and sparse on AIII but more obvious posteriorly. Sternites of AIV and AV always distinctly more setose than their tergites. Dorsal surfaces of mesosoma and abdominal tergites from AII to AIV with sculpture similar to head, but the punctures more sparse and usually smaller than on the head. Full adult colour black, sometimes with extremely weak bluish reflections.