A specialized predator of spirobolid millipede eggs (Diniz & Brandao 1993). Stegomyrmex vizottoi is the only species in the genus for which both sexes and castes are known. It has been recorded from localities in northern Argentina, Paraguay, and states of Santa Catarina, Parana, and Sao Paulo, southeastern Brazil. (Feitosa et al. 2008)

Feitosa et al. (2008) - This species is uniquely characterized by the combination of relatively large size (TL ≥ 6.00 mm), mesosoma partially sculptured but for the lateral faces which are almost entirely smooth and shining, and propodeum relatively narrow in dorsal view.

Feitosa et al. (2008) - Diniz and Brandao (1993) published observations on the foraging and nesting habits of Stegomyrmex vizottoi from Mirassol, Sao Paulo, Brazil. They observed that workers are specialized predators of spirobolid millipede eggs and forage solitarily, moving slowly in shaded areas, probing in small cracks and cavities in the soil. The ants seem to use their faces like a shovel, tucking their antennae in the antennal scrobes and pushing soil away with the face. When a millipede egg is found, it is grasped by the undersurface of the mandibles and pressed against the gular face of the worker’s head, which then returns to the nest. These ants are virtually unnoticed to the naked eye, not only because they forage individually, but because of their slow movements, and because as they age their integument becomes covered by a thin but hard layer of mud. Moreover, workers can feign death for several minutes when disturbed. 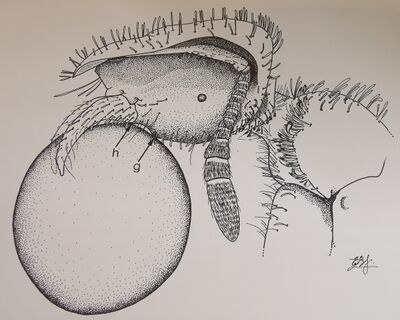 Forager holding a spirobolid millipede egg under the mandibles. Note the curved mandibles acting as pincers. From Diniz & Brandao 1993

Diniz and Brandao (1993) were the first to examine a Stegomyrmex nest in detail. The S. vizottoi small and perfectly rounded nest entrance (0.4 cm in diameter) was in a vertical soil bank, leading to a single sinuous tunnel extending about 40 cm to a secondary chamber, in the roof of which they found a funnel leading to the main chamber. Along the tunnel, which had several small dead ends, they found three enlargements, where the returning workers apparently stop to clean the eggs before reaching the secondary chamber. The cleaning process continues at the secondary chamber, and the eggs are piled in the main chamber only when completely cleaned. The main chamber contained the colony dealate gyne, its brood and a pile of fully cleaned millipedes’ eggs. The secondary chamber contained the millipede egg shells, never found in the main chamber. The total worker population in this particular nest was 76. A second nest contained some 300 workers, 22 alate gynes, seven dealate gynes, and brood. Colonies transferred to gypsum laboratory nests with conditions and architecture similar to that of natural nests, adapted easily to the new conditions and even constructed the funnel-like structure linking the secondary to the main chamber. It is interesting to note that in the relatively mild winters in southeastern Brazil, populations of colonies decrease sharply even in the laboratory, and the ants close the nest’s entrance, relying entirely on the millipede eggs collected in the previous season for nutrition during the winter time, the eggs being taken from the pile one at a time, to be consumed by all individuals arranged in a circle. This helps to make these ants unnoticed for several months a year, contributing to their rareness status. 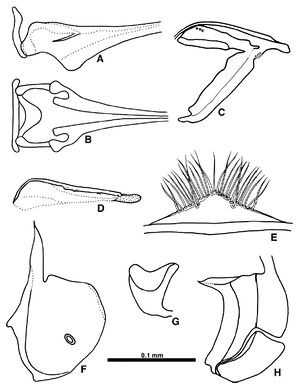 Head broadest across large bulging compound eyes (situated at the head midlength) rather suddenly narrowed in front of eyes and tapering moderately anterad; median portion of vertexal margin weakly convex; occipital corners rounded; ocelli prominent. Mandible relatively developed, subtriangular, with slightly curved outer borders, rapidly converging in apical half; gently down curved; masticatory border bearing circa seven serial teeth, with the apical tooth much more developed than the others. Clypeus broad and truncate in front. Frontal lobes not so developed as in the conspecific gynes and workers, but concealing the antennal insertions. Frontal carinae short and not expanded laterally, forming a short and shallow antennal scrobe. Antennae long and slender with 13 segments; scape very short, only about twice as long as broad.