Colonies are small, averaging 35 workers and reproduction is exclusively via gamergates. It seems to occur in small isolated populations, thus following a metapopulation structure. (Robertson 2002)

There are two species of Streblognathus

All records are from between 33 and 34 degrees latitude S, within which it has been collected from Willowmore in the west to Grahamstown and near Port Alfred in the east.

Found in open habitats, such as Nama Karoo.

Colony size of S. aethiopicus ranges from 9 to 51 workers (Ware et al. 1990). Workers stridulate, apparently for alarm purposes, by moving the presclerite of the second gastral segment, which has ridges on it, against the posterior edge of the first gastral segment (Lewis 1896, Ware 1994). Tandem-running was observed and is probably related to nest emigration (Schlüns et al., 1996).

S. aethiopicus nests near Grahamstown (Eastern Cape) have a large flanged entrance constructed off the ground, and no pebble mound (C. Peeters unpublished). On one rainy day, workers were observed to carry little balls of mud, and sticking them on the entrance flange.

Queens have been lost in Streblognathus; reproduction is carried out by gamergate workers. A single gamergate occurs in a colony and is morphologically indistinguishable from the other workers except in its ovarian development (Ware et al., 1990) and relative proportions of mandibular gland secretions (Jones et al., 1998). The gamergate has the alpha rank in a dominance hierarchy, and it mates with a foreign male. It is behaviorally distinct from foragers and nest workers (Ware et al., 1990).

Generic description, Worker - Head. Mandibles elongate with broad angle (about 138º) between apical and basal margin. Apical margin with three teeth followed by three denticles and with a tooth at the basal angle. Inner margin of apical tooth sinuate. Basal margin of mandible with an obtuse angle at about one third of its length from the base. The margin proximal to this angle lies adjacent to the clypeus when mandibles are closed. Mandibles glossy smooth or slightly shagreenate with sparsely distributed punctures containing hairs. Fringe of black or golden hairs inserted on dorsal surface just behind the distal two thirds of the basal margin and the basal tooth, and the hairs extending over the margin into the triangular space between the closed mandibles and the clypeal margin. Also a line of golden hairs along the external margin, and one behind the inner side of the apical margin. Maxillary and labial palps both four segmented. Margin of labrum deeply bisected and fringed with golden hairs. Anterior clypeal margin with middle section straight or concave, projecting beyond side margins and meeting them in a right angle or in a tooth-like projection. In anterior view, the region between the clypeal teeth is crescent-shaped, shiny, and overhangs the labrum. Posterior median portion of clypeus broadly inserted between the frontal lobes and indented medially. Clypeus with sparse, fine golden pubescence and smooth to shagreenate with sparsely distributed punctures containing short, black, pointed subdecumbent hairs that point anteriorly. Frontal triangle prominent between frontal carinae and inlaid into surface of head. Frontal lobes in dorsal view half obscuring the antennal sockets. Frontal carinae short, fading out just behind the level of the anterior margins of the compound eyes. Compound eyes in dorsal view situated at, or slightly anterior to, midlength of head and do not break the lateral margins. Head, excluding mandibles, rounded rectangular, usually a little longer than broad with a flat posterior margin and sides only slightly convex. Head covered in fine punctate sculpture, overlaid by fine, sparsely distributed golden pubescence, and covered by short, black, pointed, subdecumbent, curved hairs. Punctures poorly defined and unevenly distributed. Antennal scapes bowed, covered in sparse, short, golden or black subdecumbent or decumbent hairs and sparse, fine, golden pubescence. Neck between scape and condylar bulb (radicle) curved strongly downwards. Ventral surface of head smooth to shagreenate with variable densities of golden pubescence and with more-or-less evenly distributed anteriorly pointing, subdecumbent curved hairs.

Mesosoma. In dorsal view, promesonotal suture sharply defined, strongly curved backwards. Metanotal groove slightly impressed, defined in lateral view by the downwardly curving mesonotum meeting the flat propodeal dorsum, although in some specimens the propodeal dorsum curves down slightly at the metanotal groove. In lateral view, propodeum with elongate, flat dorsum and a nearly vertical declivity. Dorsum often with a slight indentation about a quarter of the way from the metanotal groove. Lateral margins of dorsum sometimes distinct posteriorly. At the junction of the dorsum and declivity is a pair of upwardly projecting teeth which are continuous with the sharply raised lateral margins of the declivity. Propodeal spiracle slit-shaped. Large metapleural gland opening, fringed with long golden hairs. In many individuals there is a hairless shallow furrow passing from the dorsal edge of the propodeal spiracle, round its posterior edge, and across to above the dorsal edge of the metapleural gland opening. This furrow is reduced to varying degrees across individuals. Mesosoma covered in fine, ill-defined punctate sculpture, smeared to striolate in parts, or appearing shagreenate. Mesosoma covered in sparse, fine, golden pubescence and dorsum with scattered subdecumbent short, black, pointed hairs.

Legs. Middle and hind tibiae each with a pair of pectinate spurs, the posterior spur longer and more pectinate than the anterior. Tarsal claws simple. All legs covered in short subdecumbent hairs.

Petiole. Petiolar node with about a third of its height above the level of the propodeal dorsum. In lateral view, anterior and dorsal faces form a single steep convexity that terminates in an acute point where it meets the vertical, concave posterior margin. Dorsum laterally compressed to form an acute, sharp-edged ridge. In dorsal view, petiole node longer than wide and with the posterior point of the dorsum overhanging the posterior face. Subpetiolar process in lateral view with more-or-less horizontal ventral margin meeting posterior margin at an acute but narrowly rounded angle. Petiole unsculptured except for hair pits, covered in sparse, golden pubescence and sometimes with a few strongly curved subdecumbent black hairs.

Gaster. Constriction between first and second gastral segments hardly discernable. Gaster smooth, shiny except for hair pits, and covered in sparse to moderately dense golden pubescence, and sparse black hairs that are bent near their tip. Sting well developed. 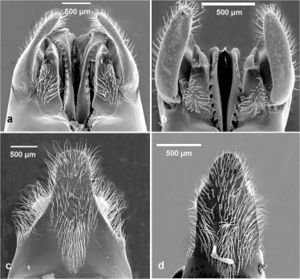 Generic description, Male- Head. Dominated by the compound eyes which take up 69-75% of the length of the head and which are hemispherical in dorsal view. Ocelli large, hemispherical. Width of median ocellus about the same as the shortest distance between the lateral ocelli. Occipital carina a blade-like ridge. Antennal sockets situated at midlength on the head; diameter of sockets greater than the shortest distance between them and also greater than the distance from outer margin of socket to margin of compound eye. Torulus built up into raised rim round antennal socket. Antennae 13-segmented, elongate, about 83% of total length (from head to tip of gaster). Scape short, equal to or slightly shorter than diameter of median ocellus. Pedicel length slightly shorter than half the length of scape. Flagellum decreases in diameter and length of individual segments from base to tip. Antennae cov- ered in fine, white pubescence. Anterior margin of clypeus built out as a narrow lamella that is broader at the sides than in the middle so that the median anterior margin is concave . Tentorial pits deeply impressed. Large frontal triangle present above the clypeus and between the antennal sockets. Head smooth with scattered hair pits except for shagreenate sculpture between the antennal sockets and on the frontal triangle and clypeus. Short, sparse golden hairs distributed over head; densest on frontal triangle and clypeus. Vertex reddish brown through to dark brown; golden brown forwards from the anterior margin of the median ocellus.

Mouthparts. Mandibles short, rounded, without teeth, not meeting when closed. Labrum bilobed and small, narrower than the distance between the closed mandi- bles. Maxillary palpi 4-5 segmented, the apical segment being a fusion segment in 4-seg- mented palpi. One individual had one palp 4-segmented and the other 5-segmented. Labial palpi 3-segmented.

Mesosoma. Pronotum small, vertical, without a dorsal surface; displaced by the large mesoscutum. Median line on mesoscutum fades out at about half its length. Parapsidal lines present, notauli absent. Scutellum dome-like, dorsellum strongly convex in lateral view and slightly overlapping the top of the propodeum. . Propodeum gently convex in lat- eral view and with spiracle slit shaped. Wings as illustrated.

Gaster. Smooth with fine, sparse, golden pubescence. Fifth gastral sternite with a pair of broad lateral ridges with a concavity in between them; long, curved golden hairs along posterior margin. Backwardly projecting golden hairs present on the lateral ridges and shorter less dense hairs in the concavity in between. Subgenital plate narrowing posteriorly and broadly rounded at the apex. Sixth gastral tergite terminates in an acute point

Genitalia. Parameres in cross-section with a sharp-edged dorsal margin and a broadly convex ventral margin. In lateral view, ventral margin of paramere is convex and dorsal margin more-or-less straight. In dorsal view, dorsal margin of paramere is bowed outwards. Exterior and apex of parameres with golden hairs. Volsellae pincer-like: digitus curved outwards and inner margin of cuspidus convex, with a narrow gap between them at their closest point. In lateral view, digitus arches downwards whereas cuspidus is more-or- less straight with a broadly rounded apex. Inner surfaces of both digitus and cuspidus cov- ered with small tubercles. Golden, curved hairs on ventral surface of volsella and inner surface of digitus and cuspidus. Ventral margins of penis valves with large, acute, sharp, backwardly projecting barbs, oriented vertically or outwards, depending on species. Apex of valves splayed outwards or inwards (depending on species) and broadly rounded with backwardly projecting barbs on ventral margin. Dorsal outer edges of penis valves joined by a large trough-like lamella that is V-shaped in cross-section, the whole complex forming the aedeagus.