Strumigenys lanuginosa occurs across a range of habitats, from wet and dry forests, to dry scrub, to urban gardens (Wetterer 2017). It nests in dead wood on the ground (Longino, Ants of Costa Rica).

Bolton (2000) - A member of the lanuginosa complex in the Strumigenys hindenburgi-group. With characters of lanuginosa-complex and instantly diagnosed by the following. 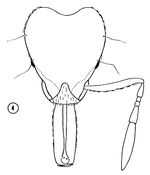 1 Upper scrobe margin with two long, freely projecting flagellate hairs, the first of these above the eye, the second apicoscrobal.

Sculpture of the first gastral tergite is variable. In most samples from Mexico and one from Costa Rica the sclerite is finely and densely striolate over its basal third, distal of which it is smooth. In most Costa Rica samples and those from Colombia and the Bahamas (where it is probably an introduction) the entire sclerite from base to apex is blanketed by the dense striolate sculpture. Apparently the two forms occur together only in Costa Rica, where the difference between them is quite striking. This may be an example of character displacement and imply that there are really two species present, but a more detailed analysis with more material will be necessary to test the hypothesis.

Apart from the diagnostic characters above, lanuginosa differs from Strumigenys vilhenai by having a broader head and shorter scapes (compare indices).

Wheeler (1905) - S. lanuginosa is closely related to Strumigenys unidentata, Strumigenys unispinulosa, Strumigenys imitator, Strumigenys louisianae, and Strumigenys fusca. It differs from the first in having perfectly straight mandibles, from the second in having the head much narrower in front, spongiform appendages on the petiole, no clavate or squamiform hairs, etc.; from the third in having a distinct tooth on the inner border of the mandibles just behind the two apical teeth; from the fourth in having the preapical mandibular spine shorter, and in lacking the club-shaped and scale-like hairs on the body; from the last in its smaller size, in having a shorter preapical spine, the head narrower in front, spongiform appendages on the petiole, etc.

Central America, Caribbean islands and Florida. Deyrup et al. (2000) suggested this ant was introduced in Florida as it is a rare species found in mesic woods in Dade and Monroe counties. Wetterer (2017) showed the range of this species is more extensive in the Caribbean than previously thought, which he suggested makes it more likely S. lanuginosa reaches its native northern limit in Florida.

Wheeler (1905) - Described from a single worker and five females taken in and about Nassau (in the Queen's Staircase and the moat around Fort Charlotte). The females were in the act of founding their colonies. Each was found under a stone covering a nest of Tetramorium simillimum, Pheidole flavens, or Monomorium ebeninum. This fact suggests that the new species, like several other species of the genus Strumigenys, habitually forms compound nests with other ants.

Head much narrowed in front, broadened behind, with deeply and roundly excised posterior margin and rounded posterior angles. Eyes in the middle of the sides of the head where there are also well-developed scrobes for the accommodation of the antennal scapes. Mandibles straight, linear, with parallel inner and outer borders, a little over half as long as the head, with two prominent teeth bent in at right angles at the tip, and a short but distinct tooth on the inner border just behind the tip. Clypeus triangular, equilateral, its posterior border straight, not extending over the base of the mandibles. Antennal scape about half as long as the head exclusive of the mandibles, slender at the base, but rapidly enlarging towards the tip, where it again narrows. Terminal funicular joint as long as the four basal joints taken together; first and fourth joints subequal, each somewhat longer than the second and third joints taken together. Thorax with distinct mesoepinotal constriction. Pronotum flattened, with sharp humeral angles, distinctly marginate in front and along the sides, and longitudinally carinate on the middle of its posterior half. Epinotum armed with two acute spines which are somewhat longer than broad at their bases, further apart than long, directed backward and slightly outward, and produced below as very small membranous lamina. Both the petiole and postpetiole with prominent spongiform appendages on their posterior and inferior surfaces; postpetiole half again as broad as the petiole; nodes of both semicircular from above, straight in front and convex behind; in profile the anterior slope of the petiolar node is gradual and concave. First gastric segment with spongiform appendages on its anterior and inferior border.

Body and appendages covered with long, delicate, flexuous, yellowish hairs, which are largely reclinate or appressed on the head, thorax, and legs, but sub-erect, very conspicuous, and abundant on the gaster. There are no club-shaped or obtuse hairs, and the curved hairs on the anterior border of the antennal scapes are inconspicuous.

Resembling the worker very closely, except in the structure of the thorax. The basal surface of the epinotum is long, oblique, and distinctly concave. The inferior membranous lamime of the epinotal spines is more extensive. The spongiform appendages on the petiole, postpetiole, and basal gastric segment are very conspicuous. Color and pilosity as in the worker; alar insertions black.

Described from a single worker and five females taken in and about Nassau (in the Queen's Staircase and the moat around Fort Charlotte).