The type material was collected from the base of dead tree.

Bolton (2000) - A member of the laticeps complex in the Strumigenys argiola group. Four of the seven sub-Saharan species in this group were fully documented by Bolton (1983); all are easily distinguished by the characters given in the key. Strumigenys minima, apart from having only 4 antennal segments, is the only species to have well-defined lateral and ventral spongiform lobes on the postpetiole and is very small (HW < 0.35). The remaining species have 6 antennomeres and lack, or have only minute vestiges of, spongiform lobes.

The apicodorsal mandibular tooth is small in Strumigenys laticeps, Strumigenys marchosias and Strumigenys tiglath, at most only fractionally longer than the apicoventral tooth, and orbicular hairs occur on the head immediately behind the posterior clypeal margin. Of these three laticeps lacks large flattened hairs on the dorsal surfaces of the mandibular blades and the mesonotum is strongly swollen and humped posteriorly. S. marchosias and tiglath each have two large flattened hairs arising from the dorsal surface of each mandibular blade and the mesonotum is not humped. The former of these has two preapical teeth on each mandible and long strap-like clypeal hairs; the latter has only a single small preapical tooth and much shorter strap-like hairs.

Bolton (1983) - The closest relative of laticeps is Strumigenys tiglath, which shows most of the characters of laticeps including the 6-segmented antennae, lack of a spiniform tooth dorsally in the apical armament of the mandible, orbicular hairs which occur immediately behind the clypeus and vestigial spongiform appendages on the petiole and postpetiole. Features separating the two species are as follows. 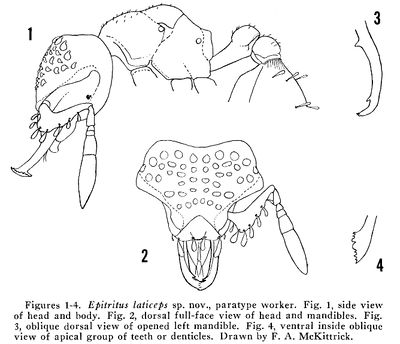 Mandibular blades with a single pre apical denticle, situated close to the apex. Apical armament of mandible consisting of a series of 7-8 denticles, without a conspicuously elongate spiniform tooth at the dorsal end of the series. Dorsal surfaces of mandibular blades naked, without large flattened hairs arising from them. Anterior clypeal margin with 4 long strap-like spatulate hairs which project forwards, the outer pair longer than the inner; and also with a short spatulate hair close to the inner base of each mandibular blade. Clypeus shining, with numerous very small appressed spatulate hairs. Remainder of head finely densely reticulate-punctate and equipped with orbicular hairs which occur from the posterior clypeal margin to the occiput; without a large space behind the clypeus which is free of orbicular hairs. Antennae 6-segmented, the scapes strongly back-curved and with a large anteriorly directed subbasal lobe at the bend, the leading edge with a row of projecting large flattened to spoon-shaped hairs. Alitrunk in profile with the mesonotum strongly humped posteriorly, the highest point of the outline being at or just behind the mesonotal midlength. Anteriorly the mesonotum slopes down to its junction with the pronotum and posteriorly it joins the still more steeply sloped propodeal dorsum. Propodeal declivity bordered by a broad lamella, usually without teeth but rarely an angular tooth is developed, projecting posteriorly from the dorsal end of the lamella. Sides of alitrunk densely reticulate-punctate everywhere. In dorsal view the alitrunk with a very shallow and feeble impression between pronotum and mesonotum and with a distinct transverse line between mesonotum and propodeum, the entire surface densely reticulate-punctate. Alitrunk lacking bizarre pilosity but dorsally with scattered minute simple hairs. Petiole and postpetiole reticulate-punctate. In dorsal view both pedicel segments conspicuously broader than long, the postpetiole with a concave anterior face and a shallow median longitudinal impression. Spongiform appendages vestigial, reduced to a narrow posterior transverse strip on the petiole node, a similar but somewhat broader strip on the postpetiole and with a short strip on the anterior postpetiolar border which traverses the most concave part of the margin. In profile both segments lacking ventral spongiform appendages, the lateral appendage of the postpetiole very reduced and present only at the posterior angle. Dorsal surfaces of pedicel segments with minute hairs as on pronotum, the first gastral tergite with larger long strong hairs which are clavate apically; the surface of the tergite weakly reticulate-shagreened and with short feeble basal costulae. Colour medium brown.