Although often found nesting in rotten wood in the leaf litter layer, S. maynei may also nest in rot holes in trees some distance above the ground. In 1970 at Tafo in Ghana I observed a nest in a cocoa branch about 1.7 m above the ground. One of the workers returning to this nest was carrying a small nematoceran fly (Bolton 1983)

Bolton (1983) - S. maynei is characterized by its absence of flagellate hairs, generally strong costulate pronotal sculpture, broad upper scrobe margins and conspicuous ground-pilosity; it is unlikely to be confused with any other species. In distribution it appears to be restricted to the forest zones of West and central Africa, and Uganda. Georges Terron's collection has yielded a couple of small workers from Cameroun in which the pronotal sculpture is very reduced indeed. These may represent a separate sibling species but I suspect that they are more likely to be members of the first brood of a new colony.

The closest relative of maynei is Strumigenys geoterra, a species which shares the characters of broad upper scrobe margins, lack of flagellate hairs and very broad conspicuous ground-pilosity. However, in geoterra the entire alitrunk is glassy smooth and without trace of sculpture, the upper scrobe margins are very broad and strikingly convex, the cephalic ground-pilosity is even coarser than in maynei, there is an obvious impression separating the pronotum and mesonotum, the pronotal dorsal pilosity is strong and elevated, and the petiole node is smooth dorsally. 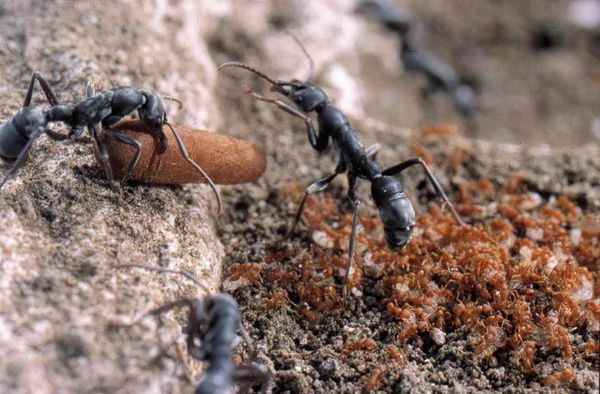 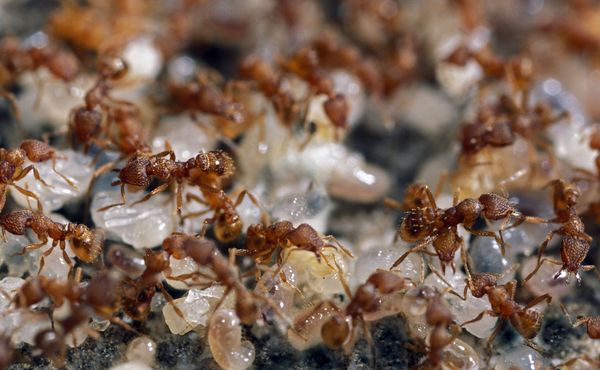 Workers and brood of Strumigenys maynei'. Photo by Patrick Landmann.

Mandibular denticles regular, without a suddenly enlarged series of 4-8 denticles basally but often with the basalmost denticle larger than those preceding. Upper scrobe margins strongly developed into broad projecting flanges which run the length of the scrobe and do not peter out posteriorly, the margins without flagellate hairs present. Clypeus sculptured, finely punctulate to granular, with short but broad spatulate ground-pilosity and a row of longer spatulate hairs projecting forwards over the bases of the mandibles from the false anterior clypeal margin. Dorsum of head strongly reticulate-punctate, with conspicuous short but broad spatulate ground-pilosity. In profile the cephalic dorsum behind the highest point of the vertex with 4-6 stout standing hairs which are narrowly to moderately clavate apically, the variation in number occurring in single nest-series. Usually 4 such hairs are present, situated in a row in front of the occipital margin; rarely a pair is present anterior to this row. Alitrunk in profile with promesonotum shallowly convex and sloping more steeply posteriorly to the impressed metanotal groove. Propodeum convex dorsally, on a lower level than the promesonotum and terminating posteriorly in a pair of triangular teeth which are subtended by conspicuous spongiform infradental lamellae. Sides of pronotum longitudinally costulate, usually distinctly so but sometimes the costulae effaced in places or becoming weaker lower down the sides; the spaces between the costulae smooth. Pleurae and sides of propodeum densely reticulate-punctate. Pronotal dorsum longitudinally to obliquely strongly costulate, the spaces between the costulae smooth; this sculpture usually weaker in small workers than in large. Remainder of dorsal alitrunk strongly reticulate-punctate. Flagellate hairs usually absent from pronotal humeri (present in only a single specimen of those examined). Mesonotum with a single pair of curved standing clavate hairs. Ground pilosity of dorsal alitrunk dense spatulate and very conspicuous. Spongiform appendages of pedicel segments moderately developed in profile. The petiole with a ventral lamella and small lateral processes, the postpetiole with a well developed ventral lobe and smaller lateral lobe. Petiole in dorsal view reticulate-punctate, sometimes only superficially so, with a narrow transverse spongiform strip posteriorly. Postpetiole dorsally smooth to superficially punctulate, sometimes with a suggestion of minute longitudinal striae; with a narrow posterior spongiform strip which abuts a similar strip on the base of the first gastral tergite. Basigastral costulae short. Dorsal surfaces of petiole, postpetiole and gaster with stout apically clavate hairs. Colour dull brownish yellow to mid-brown.