Strumigenys rogeri is a very small ant (total length ~ 2.5 mm) that nests in and under dead wood and preys on tiny soil arthropods. This species has spread to many parts of the world through human commerce. However, because S. rogeri workers are so small and slow moving, and they become motionless when disturbed, most people, including field biologists, remain unaware of their presence. Strumigenys rogeri apparently originated in tropical Africa, where its closest relatives all live, but it has become wide-spread on tropical islands of the Indo-Pacific and the West Indies, and in peninsular Florida. Outside of Africa and Florida, there are only a small number of continental records of S. rogeri, including a few from South and Central America and just one from continental Asia, in peninsular Malaysia. It is unclear whether S. rogeri has not yet spread to these continental areas, whether continental ants have competitively excluded S. rogeri, or whether these ants have been simply overlooked in surveys of diverse continental faunae. There is little information on what impact S. rogeri may be having on the native mesofauna in its exotic range. (Wetterer 2012)

Bolton (2000) - A member of the rogeri complex in the Strumigenys rogeri -group. In both Strumigenys bernardi and Strumigenys vazerka the mandibles are slender and obviously bowed outward. On each mandible the proximal preapical tooth is elongate, slender and spiniform, shallowly recurved and usually distinctly longer than the maximum width of the mandible. Distal preapical teeth much smaller and inconspicuous, that on the right mandible usually completely concealed by the left apicodorsal tooth at full closure. Distal preapical tooth of left mandible frequently missing in bernardi. Most samples of bernardi can quickly be discriminated from vazerka (and also rogeri) by this lack, as the distal preapical tooth of the left mandible is always present in vazerka. However, in some populations of bernardi a distal preapical denticle or small tooth is retained. These can be identified as the propodeal dorsum is reticulate-punctate in bernardi, smooth and shining in vazerka.

Bolton (1983) - Among the members of the rogeri-complex in which the preocular notch is strongly developed and extends onto the ventral surface of the head as a transverse groove or impression, rogeri is characterized by its simple dentition (without intercalary teeth in the apical fork and with a full complement of preapical teeth), relatively long straight mandibles, long antennal scapes, presence of pronotal flagellate hairs, and presence of characteristically shaped upper scrobe margins which lack a projecting laminar rim or flange.

Bharti & Akbar (2013), India - The species is easily recognized in the Indian fauna as it is the only one to have the ventrolateral margin of the head deeply indented immediately in front of the eye, so deeply that the anterior portion of the eye is detached from the side of the head. Ventral surface of head with a transverse preocular im¬pression that is posterior to and separate from the postbuccal groove. Preapical dentition of each mandible of two articles; with a preapical tooth and a denticle (Bolton, 2000).

In Florida (where it is introduced) it is a common species in bayheads and swamp forest as far north as northern Orange County. Pest status: none. First published Florida record: Deyrup and Trager 1984; earlier specimens: 1965. (Deyrup, Davis & Cover, 2000.)

The record of this tramp species in Hong Kong is not surprising considering its widespread range in nearby countries (Philippines, Taiwan, and Vietnam), which have relatively similar climatic conditions. However, a single alate has been collected from a mangrove habitat, an unlikely habitat for this species, and no workers have been collected in Hong Kong. Nonetheless, the record from Hong Kong is the first observation of this species for mainland China (Tang et al., 2019). 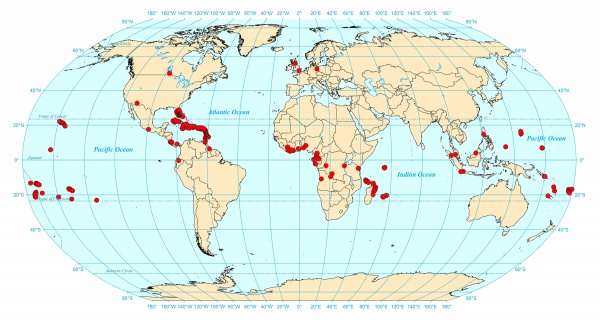 Strumigenys rogeri is a well known and very efficient tramp species, probably of West African origin but very widely distributed in the tropics by human commerce. It has also been recorded from hothouses and other constantly heated buildings in the temperate zone. Brown (1954) gives observations on the biology of rogeri which were made by Wilson in Cuba. In West Africa the species usually nests in rotten wood on the ground or under the bark of larger fallen trunks or branches, but on occasion it will nest directly in the soil or in wood which has crumbled almost to powder. The Neotropical distribution of rogeri is summarized by Brown (1962b) and Kempf (1972), and the Pacific distribution by Wilson & Taylor (1967).

Brown (1954): "I am fortunate also in having important notes on the biology of S. rogeri made by E. O. Wilson during his stay in Cuba in the summer of 1953.

Wilson took his observation colony at San Vicente, Pinar del Rio, Cuba, from a small nest under a rotten limb lying on well shaded ground. The galleries extended into the wood itself. Transferred to a small plaster observation nest, the workers readily captured numbers of entomobryoid collembolans proffered; campodeids up to four times the length of the ants were also always accepted and, like the entomobryoids, were fed to the larvae. Also observed to be chewed by the larvae after capture were a small psocopteran, a small ichneumonid wasp, and a small, injured embiopteran that had previously been ignored by a colony of Smithistruma nigrescens (= Strumigenys nigrescens) Wheeler. A symphylan and a pseudoscorpion, one each, were accepted and eaten by the larvae, but only after lengthy contact with the ants. Other specimens of these last two groups seem to have been refused by the larvae after capture on some occasions. A small polydesmid millipede was also captured, but soon rejected by larvae and workers. Consistently avoided or ignored when offered in the intimate confines of the observation nest were mites, nasute and other termites, small isopods, poduroid collembolans, adult staphylinid and sylvanid beetles of small size, a small campodeiform beetle larva, and dead mosquitoes, though the beetles mentioned disappeared from the nest and may possibly have been eaten.. Drosophila adults werc caught by the adults, but later discarded.

Entomobryoid collembolans seemed to be the usual and preferred prey fed to the larvae, although campodeids were never refused. In feeding habits, therefore, S. rogeri follows the generic habit of collembolan predation but, like some other widespread dacetine species, it will also accept a variety of other small arthropods, particularly campodeids, when available. In hunting, or when disturbed, the workers and females open the mandibles to slightly more than 180 degrees."

Wheeler (1908): Numerous workers and females taken from several colonies nesting under stones in a nearly dry stream bottom behind the Coamo baths. The rediscovery of the female of this species shows that Emery was right in his contention that Roger had described two very different species under the name of Pyrmaica gundlachi (=Strumigenys gundlachi). The females among my specimens agree perfectly with Roger's description and figure.

Deyrup (1997) reports this species is often the dominant dacetine ant in moist hammocks and swamp forest.

Clouse (1999) - Found Strumigenys rogeri to be common in wet areas of Everglades National Park and occurring in high densities along marshy trails on the Eastern Florida coast.

Deyrup, Davis & Cover (2000): This species is the common dacetine in bayheads, baygalls, and other swamp forest habitats in south and central Florida. Samples collected by Walter Suter between 1960 and 1970 suggest that several species of Strumigenys, including Strumigenys louisianae, were much more common in the absence of S. rogeri than they are today, although our survey methods may not replicate Suter's, and there have been many other changes in Florida since 1970. Since this species is apparently moving northward, it might be useful to do some intensive sampling ahead of its advance.

Longino (Ants of Costa Rica) - At La Selva Biological Station, rogeri occurs in leaf litter deep within mature rainforest. Thus, it appears to be one of the few exotics that can invade mature forest, rather than being restricted to synanthropic habitats.

Using Malaise traps at various locations, Tang et al. (2019) collected female alates that had flown from their nests in sampling conducted from mid-June to mid-July.

Mandibular blades almost straight and at full closure nearly parallel, not obviously bowed outwards. Apical fork of each blade with 2 spiniform teeth, without intercalary teeth or denticles. Preapical armament of 2 teeth on each blade, set in the distal third of the blade's length; the proximal preapical teeth larger than the distals. Upper scrobe margins narrowly concave immediately behind the frontal lobes, with a pinched-in appearance in full-face view. Behind this the upper scrobe margins feebly divergent to the level of the eye and relatively close together, sometimes even shallowly concave directly above the eye, then developed and the anterior portion of the eye detached from the side of the head. Preocular notch continued onto the ventral surface of the head as a broad impression which runs transversely immediately in front of the level of the eye, but not reaching the ventral midline. Antennal scapes long and slender, approximately straight, the leading edges equipped with a row of narrowly spatulate hairs which are angled towards the apex. Dorsum of head with short narrowly spatulate ground-pilosity which is directed anteriorly, the upper scrobe margins with a row of larger anteriorly curved spoon-shaped hairs. With the head in profile the dorsum with 6 standing hairs which are arranged as a row of 4 transversely close to the occipital margin and a more anteriorly situated pair. Dorsum of head reticulate-punctate. Pronotal humeri each with a long fine flagellate hair and the mesonotum with a single pair of stout standing hairs. Otherwise the dorsal alitrunk without standing hairs, the ground-pilosity of sparse narrow hairs which are closely applied to the surface. With the alitrunk in profile the posterior portion of the mesonotum sharply depressed, the metanotal groove represented by a transverse line across the dorsum but not or only minutely impressed. Propodeal teeth triangular and subtended by narrow infradental lamellae. Sides of alitrunk sometimes completely smooth but usually the propodeum punctulate and the pronotum with faint traces of striolate or costulate sculpture anteriorly. Pronotal dorsum longitudinally striolate or costulate on a finely punctate surface, but in some the costulae may be very feeble and indistinct; the median costula is usually stronger and more sharply defined than any other and in many samples forms a weak median longitudinal carina at least on the: anterior half of the pronotum. Remainder of dorsal alitrunk reticulate-punctate. Dorsum of petiole node weakly reticulate-punctate, the postpetiole generally smooth but sometimes with vague sculptural vestiges. Petiole in profile with a spongiform ventral strip and the node with a transverse collar posteriorly. In profile the postpetiole with large ventral and lateral spongiform lobes. In dorsal view the postpetiole with a posterior spongiform strip which abuts a similar but narrower strip on the base of the first tergite. Basigastral costulae sparse but sharply defined. Dorsal surfaces of petiole, postpetiole and gaster with stout standing hairs which are weakly swollen apically. Colour dull yellow to light medium brown.