In Japan this species forms huge polydomous colonies that can contain millions of workers.

Bolton (2007) - A member of the T. albipes complex in the Technomyrmex albipes group. T. brunneus is easily distinguished from Technomyrmex albipes, and all other former infraspecific taxa and synonyms that were attached to albipes, by its possession of a longitudinal groove on the mandible and relatively posteriorly located eyes. The presence of a mandibular groove is shared only with Technomyrmex mandibularis of Malaysia, which also has the eyes located posteriorly, but mandibularis has an unsculptured, highly polished head capsule, a row of short erect setae on the dorsal surface of the scape and numerous setae on the dorsum of the head behind the level of the posterior margin of eyes, all of which are absent from brunneus.

Bolton (2007) - The distribution of brunneus is Oriental. Its distribution in Japan is illustrated in Imai, Kihara, Kondoh, et al. (2003). The discovery of a single specimen from Brunei, apparently without the species being present in intervening states, is anomalous and the record probably represents an introduction or perhaps a mislabeling of the specimen.

This species is widely distributed in the Oriental region proper and is quite common in parts of China, Taiwan and Japan. It is certainly the species described and illustrated as albipes by lmai, Kihara, Kondoh, et al. (2003) and Zhou (2001), and is probably the species included as albipes by Wu & Wang (1995), although the latter's sketch is quite crude. It is certainly the species intensively studied in Japan by Tsuji, Furukawa, et al. (1991), Yamauchi, Furukawa, et al. (1991), Tsuji & Yamauchi (1994) and Ogata, Murai et al. (1996).

Japan Yamauchi, Furukawa, et al. (1991) This species in Japan forms huge polydomous colonies that may contain millions of adults. It often nests in dead standing trees and has a complex reproductive system. New nests are begun by recently dealate queens, following a nuptial flight with alate males, as is usual in ants. The newly established fecund queen produces large numbers of workers and about an equal number of ergatoid queens that are morphologically intermediate, in varying degrees, between workers and winged queens. She also produces wingless (ergatoid) males, which mate with the ergatoid queens and produce offspring of both sexes and all castes. Eventually the foundress queen dies and reproductive behaviour is continued only by the ergatoid queens and the ergatoid males. Ergatoid queens do not conduct foraging activities and are not found outside nests, and nests in this condition may undergo fission and bud off new colonies. In the fullness of time the ergatoid queens and ergatoid males produce new generations of alate queens and alate males, to complete the cycle.

There appears to be no trophallaxis in this species and nutrient transfer is achieved entirely by the distribution of trophic eggs, which are produced by all the female castes including the workers. This does not correspond to the situation in Technomyrmex difficilis, where trophallaxis appears to be present (Warner, 2003).

Taiwan Yamane et al. (2018) - This tramp species is very common and widely distributed in Taiwan. However, biological information is still limited. A colony was found in a dead stem of a tree in Wulai. One of us (CML) located another colony in dry decayed wood in Fu Jhou Shan, from which numerous workers, winged and wingless males, and winged queens were collected (for intercastes and wingless sexuals, see Tsuji et al., 1991, Yamauchi et al., 1991, and Ogata et al., 1996).

Tsuji, Furukawa, et al. (1991) analysed the female intercastes and found that all had spermathecae, which were absent from genuine workers. These intercastes correspond to the ergatoid queens (flightless) described throughout Formicidae. They were able to distinguish three distinct morphological intercastes (major, medium and minor) between fully developed queens and true workers, based on number of ocelli present and the degree of development of the mesosoma. Most intercastes were inseminated and had developed ovaries, and the number of ovarioles increased with body size from minor to major. Alate queens had a larger body size, far more ovarioles and larger spermathecae than the largest ergatoid queens. 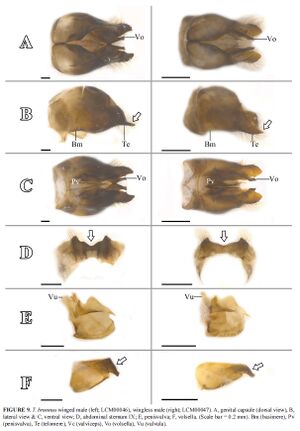 Yamane et al. (2018) - Comparison of genitalia between winged and wingless T. brunneus males. Winged males have significantly larger genitalia than wingless males: for instance, capsule approximately 3.4 times, penisvalva 1.6 times, and volsella 1.6 times as long as those in the latter (Fig. 9). Moreover, winged and wingless males have distinctly different morphologies in genital capsule, abdominal sternum IX, and volsella. The telomere (Fig. 9B) is in lateral view elongate with subparallel upper and lower margins and round apex in winged males (but thicker with convex lower margin and acute apex in wingless males). The sternum IX (Fig. 9D) in dorsal view has well-developed posterolateral corners and a deep median notch in the former (with weaker posterolateral corners and a shallower median notch in the latter). The valvura (Fig. 9E) is thicker in the former than in the latter. The ventral margin of the volsella (Fig. 9F) bears a well-developed hook in the former (but the hook smaller and equipped with a series of small teeth in the latter). Thus, the structure of genital sclerites shows remarkable differences between winged and wingless males (see also Ogata et al., 1996).

Basal half of mandible with a longitudinal groove on the dorsal surface close to the outer margin. Frontal carina with 2 (very rarely 3) setae: in profile the posteriormost seta close to or at the level of the anterior margin of the eye. Dorsum of head posterior to this entirely lacks setae. With head in full-face view the anterior clypeal margin with a minute median indentation. Sides of head convex. Eyes located at or just behind the midlength, EPI > 100; outer margin of eye touches, or usually just breaks, the outline of the side. With mesosoma in profile the mesonotal outline is evenly curved, without a distinct step or angle in the outline that defines conspicuous dorsal and declivitous faces. Proprodeal dorsum and declivity meet in an angle; straight-line length of propodeal dorsum in profile is less than depth of declivity to the spiracle. Number of setal pairs on mesosoma: pronotum 1 - 3 (usually 2); mesonotum 1; propodeal dorsum 0; lateral margin of propodeal declivity 1. Gastral tergites 1 - 4 each with numerous setae, distributed everywhere on the sclerites; maximum length of setae on first gastral tergite is usually slightly less than the maximum diameter of the eye but sometimes the two are subequal. Head, mesosoma, petiole and gaster blackish brown to black. Coxae, femora and tibiae uniformly blackish brown to black, same colour as the mesosoma or gaster; never with strongly contrasting lighter coxae. Tarsi of middle and hind legs yellowish white to dull yellow, much paler than the tibiae.

Very similar to worker in structure, pilosity and coloration except for mesosoma that bears wings. Head slightly longer than or almost as long as broad. Mandible with longitudinal groove. Anterior margin of clypeus with narrow and shallow median emargination (Fig. 4C - the images referenced here are found in the caste section). Anterior ocellus larger than posterior ocelli. With mesosoma in profile, mesonotum anteriorly gently sloping and posteriorly flat; mesopleuron divided into two parts by weak and incomplete suture (Fig. 4A). Propodeum with short dorsum; side of propodeum not demarcated from metapleuron; declivity flat; spiracle located on propodeal side at level of midlength of declivity. Almost entire surface of body very finely and densely punctate and matte; gaster with more superficial punctation and weakly shiny; mandible, petiole and coxae of legs much more shiny.

Standing pilosity very poor, seen only in anterior portion of head around mouthparts including anterior margin of clypeus, on gastral venter and around tip of gaster; frontal carina lacking any standing hairs; all hairs on ventral surfaces of mesosoma and gaster appressed. Body almost entirely black; mandible, maxillary and labial palpi, antennal segment II yellowish; tarsi of all legs whitish.

In wing venation, the queen and winged male are very similar to each other (Fig. 5, 7).

Wingless (n=3). TL 2.5, HW 0.61–0.65, HL 0.59–0.63, SL 0.22–0.24, EW 0.17–0.18, EL 0.23, CI 103–105, SI 35–38. In general habitus similar to worker, but easily separable from the latter by the presence of ocelli (note that intercaste females often with ocelli) and exposed genitalia. Head similar to that of winged male. Pronotum longer and mesonotum less massive than in winged male. With mesosoma in profile, mesonotum strongly and roundly convex dorsally; mesopleuron not divided into upper and lower portions; mesoscutellum not differentiated. Metanotal groove distinct, without flat dorsum of metanotum; metapleuron not demarcated from propodeal side. Genitalia exposed but much smaller than in winged male.

Standing pilosity poor, confined to anterior margin of clypeus, mandible, venter and tip of gaster and coxae of all legs. Almost entire body dark reddish brown; antenna lighter with segment II (pedicel) yellowish; mandible yellowish; tarsi of all legs whitish. Comparison of genitalia between winged and wingless males. Winged males have significantly larger genitalia than wingless males: for instance, capsule approximately 3.4 times, penisvalva 1.6 times, and volsella 1.6 times as long as those in the latter (Fig. 9 - the images referenced here are found in the caste section). Moreover, winged and wingless males have distinctly different morphologies in genital capsule, abdominal sternum IX, and volsella. The telomere is in lateral view elongate with subparallel upper and lower margins and round apex in winged males (but thicker with convex lower margin and acute apex in wingless males). The sternum IX (Fig. 9D) in dorsal view has well-developed posterolateral corners and a deep median notch in the former (with weaker posterolateral corners and a shallower median notch in the latter). The valvura is thicker in the former than in the latter. The ventral margin of the volsella bears a well-developed hook in the former (but the hook smaller and equipped with a series of small teeth in the latter). Thus, the structure of genital sclerites shows remarkable differences between winged and wingless males (see also Ogata et al., 1996).

The holotype of brunneus, as well as being the most westerly individual seen of this species, is also the palest in colour, with a medium brown head and mesosoma and a blackish brown mottled gaster. I strongly suspect that the specimen had not attained full adult colour when captured as it matches some immature workers included in a sample from Kyushu.