Prebus (2017) - Temnothorax is a highly morphologically and behaviorally diverse genus. Despite recent taxonomically focused molecular phylogenies [Beibl, Stuart, Heinze 2005, Beibl, Buschinger, Foitzik 2007, Heinze, et al. 2015] and extensive taxonomic works [Mackay 2000, Baroni Urbani, C. 1978], Temnothorax remains widely renowned as one of the most taxonomically difficult ant genera [Buschinger, 1981]: its status as a phylogenetically natural group has been repeatedly revised [Bolton 2003] and called into question [Ward, 2007]. This is a product of multiple factors: subtle morphological variation on a global scale among groups of species, striking departures from the morphological norm in others, morphological convergence with distantly related genera [Ward, et al. 2015], weak diagnostic characters for the genus as a whole, and regional treatments of species in the absence of global understanding of the clade structure (Prebus 2017, Additional file 1). The current absence of an infrageneric classification system for Temnothorax is not for a lack of effort, though: past taxonomists erected five subgenera to compartmentalize the species diversity of this genus, none of which are currently recognized due to a lack of clear diagnostic characters [Bolton 2003]. My studies of Temnothorax are designed to elucidate the phylogeny of Temnothorax on a global scale in order to gain insight into the structure of relationships within the genus, verify that the genus is monophyletic as currently diagnosed, understand the biogeographical history and taxonomic evolution, and revise the taxonomy of Temnothorax.

I generated, assembled, and analyzed two molecular datasets: a traditional multi-locus Sanger sequencing dataset, and an ultra-conserved element (UCE) dataset. Using maximum likelihood, Bayesian, and summary-coalescent based approaches, I analyzed 22 data subsets consisting of 103 ingroup taxa and a maximum of 1.8 million base pairs in 2485 loci. Analysis of this data finds Temnothorax is corroborated as a natural group, and the notion that many of the historical subgeneric and species group concepts are artificial is reinforced. The results also suggest an origin of Temnothorax at the Eocene-Oligocene transition, concerted transitions to arboreal nesting habits in several clades during the Oligocene (coinciding with ancient global cooling), and several convergent origins of social parasitism in the Miocene and Pliocene. As with other Holarctic taxa, Temnothorax has a history of migration across Beringia during the Miocene. The resulting evolutionary relationships among and within discrete sets of species in the genus shows the strict form of Emery’s Rule, in which a socially parasitic species is sister to its host species, is not well supported in Temnothorax. 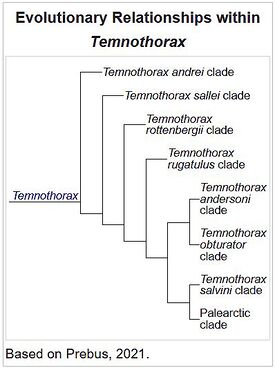 Data analysis (see the introduction on this page and Prebus 2017) showed, with strong support, that Temnothorax is composed of seven clades in a pectinate series, with the clades displaying a high degree of biogeographic structure.

Details provided in the following are based on (Prebus 2017, Additional file 1). The ordering of the clade's listing is based on their evolutionary relationships as shown by the cladogram on the right. Clades with a species revision, e.g. Prebus 2021 (salvini clade), have a separate clade webpage (see the link under the clade heading) that includes diagnostic features for the clade, a list of species, species identification information, etc.

The sallei-clade, found in the southern Nearctic, Neotropics and the Greater Antilles, is the next to branch off. This group shows within-clade geographic structure, with the sallei and iris subclades distributed among the Greater Antilles and, in the case of Temnothorax allardycei, southern Florida and the Bahamas. These Caribbean species were informally classified by Baroni Urbani [1978] as being members of the Macromischa allardycei- (Temnothorax allardycei), sallei- (Temnothorax laetus and Temnothorax sallei), splendens- (Temnothorax splendens), iris- (Temnothorax gundlachi), and versicolor- (Temnothorax poeyi) species groups. The sallei-group appears to be paraphyletic, with members distributed between the purpuratus and salvini-clades (see below). T. mmp11 and T. cf. striatulus form a third distinct group, known only from the cloud forests of Meso-America. The latter is, at first glance, indistinguishable from Temnothorax striatulus, but the comparative length of the petiolar peduncle and appendages neatly separate the two taxa. The fourth subgroup within the purpuratus-clade is the remainder of the tricarinatus-group proposed in Mackay [2000] (Temnothorax carinatus, Temnothorax neomexicanus, Temnothorax obliquicanthus, Temnothorax punctithorax, T cf. rugithorax, Temnothorax stenotyle, and Temnothorax tricarinatus), within which the striatulus and at least one member of the andersoni- species groups arose. This group is broadly distributed throughout the southern Nearctic, with at least two species (T. striatulus and T. mmp08) in the cloud forests of Meso-America. Following the purpuratus-clade, two smaller clades emerge.

The first of the smaller clades is the Palearctic rottenbergi-clade, composed of members of the nominal species group sensu Cagniant & Espadaler [1997] (Temnothorax cabrerae, Temnothorax formosus, and Temnothorax semiruber), which are large, typically ground-nesting species distributed throughout the Mediterranean region, including North Africa and the Canary Islands. Two other species with a Mediterranean distribution are found to be affiliated with the rottenbergi-group: T. cf. flavispinus of the arboreal flavispinus-group (sensu Cagniant & Espadaler [1997]) and the ground-nesting Temnothorax cristinae, which has been proposed to be closely related to Temnothorax exilis [Arcos, Espadaler, Catarineu 2013)].

The second of the smaller clades is the rugatulus-clade, which contains a mixture of Palearctic and broadly distributed North American species. The arboreal species Temnothorax clypeatus and Temnothorax corticalis (clypeatus- and corticalis-groups sensu Radchenko [1995a]), which are both rarely collected but apparently widely distributed in the western Palearctic, are contained within this group. The nominal species of this clade is commonly encountered nesting under stones in montane western North America (longispinosus group sensu Mackay [2000]), sister to an undescribed species collected from a mesic mountaintop habitat on the southern Baja California peninsula. Temnothorax schaumii (schaumii-group Mackay [2000]) and Temnothorax smithi (silvestrii-group Mackay [2000]) are somewhat rarely collected arboreal species from eastern North America. The longispinosus- and schaumii-groups are polyphyletic as originally described: Temnothorax rugatulus and T. schaumii are more closely related to each other than to the other members of the original groups, all of which are monophyletic and nested within the Palearctic-clade (see below).

The Neotropical and Caribbean salvini-clade is the next group to emerge, followed by the obturator and Palearctic-clades. The members of the salvini-clade are morphologically and behaviorally diverse, including many arboreal species from Meso-America and the enigmatic ground-nesting eastern North American species Temnothorax pergandei (formerly subgenus Dichothorax). Species in this clade have been informally classified as members of the hispidus-group sensu Mackay [2000] (T. sp. nr. peninsularis), the arboreal mainland Meso-American Macromischa species of the sallei- species group (Temnothorax aztecus, Temnothorax salvini and Temnothorax fuscatus), and the primarily ground-nesting Meso-American and Caribbean pulchellus-group sensu Baroni Urbani [1978] (Temnothorax augusti, Temnothorax subditivus, Temnothorax terricola and Temnothorax torrei).

The obturator-clade is a small group encompassing the obturator- and emmae- groups sensu Mackay [2000], and the creolus-group sensu Baroni Urbani [1978]. All known species from this group are arboreal, nesting in dead twigs or galls on live trees. Additional undescribed species were recently collected from Puerto Rico and Meso-American cloud forest. The obturator- and salvini-clades are both broadly distributed, having ranges like that of the purpuratus-clade, with members in the southern Nearctic and the Neotropics, including the Greater Antilles.

The Palearctic-clade, as implied by the moniker, is mostly confined to the Palearctic biogeographic realm, with two notable exceptions: the dulotic eastern Nearctic species Temnothorax americanus (formerly Protomognathus) and a group that contains many of its hosts (the remainder of the polyphyletic longispinosus and schaumii-groups, which will be referred to as the longispinosus-group below) are nested within this clade; additionally, the Afrotropical Temnothorax mpala is nested within the southern Palearctic laurae- species group (sensu Prebus [2015]). The socially parasitic corsicus- (formerly genus Myrmoxenus) and muellerianus- (formerly genus Chalepoxenus) species groups are nested within the Palearctic-clade as well, and are sister to [T. americanus + longispinosus-group] and the laurae- species group, respectively. The Palearctic clade is composed of four subclades and is generally, with a few exceptions, ground nesting.