Teratomyrmex is rarely encountered and fewer than 30 collections are present in ANIC. The majority come from rainforests, except one which is from a dry sclerophyll forest on Mt. Coot-tha, Brisbane. Teratomyrmex greavesi can be locally common but the other two known species are rarely found and then only as stray foragers. They may nest in rotten wood on the ground. Very little is known of their biology. (Shattuck and Reilly 2013)

The propodeum has a single pair of spines. The pronotum is expanded towards the sides into wing-like projections.

Shattuck and Reilly (2013) - The genus has been characterised by the distinct wing-like projections on the pronotum which were described (Wheeler and Wheeler 1974, Teratomyrmex greavesi) ‘as if it has a huge tumor on the top of its thorax’. However, two more recently found species have these pronotal projections less well developed, although still present. 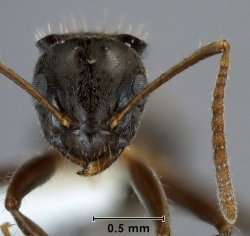 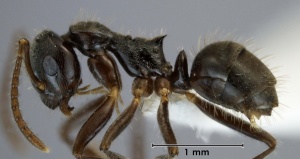 Worker of T. greavesi from Queensland.

Thorax of most unusual shape. Dorsum of pronotum very flattened, margined. This flattened surface is about three times as broad as long, the anterior and posterior borders deeply concave, the sides strongly convex, the corners rounded. The sides of the pronotum slope inwards and can be seen only in the profile view. The mesonotum resembles a cylinder which fits under the posterior raised lip of the pronotum, and is about a third as broad as the pronotum. Metanotum slightly broader than mesonotum and surmounted by two distinct spiracular tubercles. The dorsum of epinotum resembles a wide-necked flask, the anterior half circular, the posterior half is narrowed, with parallel sides, the posterior corners produced as broad sharp teeth. The posterior border, between these teeth deeply concave. Petiole surmounted by an erect scale-like node which is greatly narrowed at the top. It bears no spines. Gaster not overhanging petiole, ovate, with the cloacal orifice surrounded by a fringe of hairs. Legs moderately long, middle and hind tibiae with pectinate spurs, tarsal claws simple.

McAreavey gave the genus the name Teratomyrmex after the latin ‘terato’, meaning monster, wonder, or marvel. (Shattuck and Reilly 2013)