A Bulgarian social parasite found in the nest of a of Tetramorium species nesting under a rock in a grassland.

Kiran, et al. (2017) - Gynes differ from the other three Teleutomyrmex species by the absence of any carinae or teeth on dorsal surface of propodeum, by a very short dorsal profile of propodeum, by a much stronger developed reticulate or alveolate microsculpture covering the whole surface of lateral mesosoma and petiole and by smaller CL / CW. Furthermore, they differ from Tetramorium seiferti by a much smaller DLO / DFC (0.567 - 0.600 vs. 0.667 - 0.786). Additional differences to Tetramorium schneideri are a larger HTL / CS and a smaller EL / CS, and to Tetramorium kutteri a much smaller CL / CW, larger PW / CS and HTL / CS, and smaller ClyW / CS. 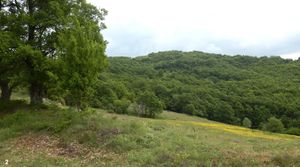 Kiran, et al. (2017) - Host: The two dealated queens were found on the back of a dealated queen of Tetramorium cf. chefketi together with few host workers in the nest. The host ant species belongs to the T. chefketi species complex in contrast to the hosts from the T. caespitum / impurum complex reported for Tetramorium schneideri and Tetramorium kutteri in Europe.

The nest of Tetramorium cf. chefketi with Teleutomyrmex buschingeri was found under a stone on a southern slope of a dry grassland situated in an oak forest. The habitat type is quite different from the known habitats of related species. The altitude of 640 m, where the species was sampled, is notably less than the altitudes of the localities of the other ultimate ant parasites (1600 - 2300 m) (excluding one in Turkmenistan)

The species is dedicated to Prof. Alfred Buschinger who has made great contributions to the study of socially parasitic ants.