A Turkish social parasite found in the nest of Tetramorium chefketi nesting under a stone in a pine forest. 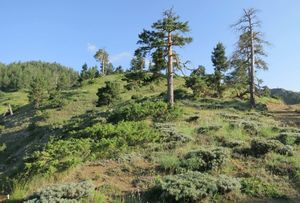 Kiran, et al. (2017) - The type series was collected from a Tetramorium chefketi nest located under a stone in a Pinus sylvestris L. forest older than 100 years. There are many trees about to die because of their old age, and therefore there are very large sun exposed areas on the forest ground. The ground is not inclined near the nest because the nest site is placed on the top of the hill.

The habitat is similar to that reported by Tinaut (1990) for the type locality of Teleutomyrmex kutteri.

Pronotum narrower than head (PNW / CS 0.732 - 0.835), anterolaterally with small angles, in lateral view scutum raised over pronotum, dorsal surface of scutum and prescutum straight, scutellum higher than scutum, metanotum very small, like a tooth. Dorsolateral margins of propodeum developed as distinct carinae, the longer dorsal and the shorter declivitous profile of carinae forming an obtuse angle with a blunt tooth at the position where spines normally are based; distance of propodeal spiracle from posterior margin of propodeum twice as long as the distance from anterior margin to spiracle. Petiolar scale in profile triangular, with a nearly linear frontal and broadly convex caudal profile. Dorsal outline of postpetiole convex in lateral view. Gaster typically dorso-ventrally flattened in virgin females.

The species is dedicated to Dr. Bernhard Seifert for his great contributions to this study.